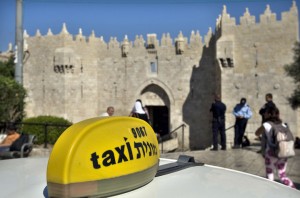 BuzzFeed reports: With just one touch of a button in Yerushalayim, you can now order a taxi with a baby car seat, a cold drink, fresh flowers — or a “kosher” driver.

David Shmuel, 60, is one of those drivers working with Gett, Israel’s homegrown and most popular taxi app. Shmuel has a Gett “kosher” taxi fleet — Gett Mehadrin — in which customers can order a driver who does not drive on Shabbos.

“It’s like milk at a supermarket,” Shmuel told BuzzFeed News during a taxi ride in Yerushalayim. “There are lots of options. Some people like a certain kind — kosher.”

Gett launched the Mehadrin taxi fleet in March. It’s only available in Israel, and there are now around 1,000 Mehadrin drivers out of Gett’s 6,700 nationwide as of August, according to Iris Hermon, the head of marketing for Gett in Israel. The fleet accepts any Gett driver — from all races, religions, and genders — and includes a few Arab drivers, though Hermon declined to provide an exact figure. Nationally, Gett Mehadrin accounts for up to 20% of the company’s monthly rides, the majority of which are in and around Yerushalayim, according to Hermon.

The new service, depending on whom you ask, is either entirely reasonable, entirely racist, or not something the average Jerusalemite thinks twice about having these days. It has also gained a reputation among some drivers as the “Jewish driver” option in a city defined by cycles of religious and racial divides.

“It’s racist,” agreed Ahmed Abu Tir, an east Jerusalem resident and Gett driver. He, like all the Palestinian drivers interviewed, referred to it as the “Jewish driver” option.

Abu Tir knows that unlike Gett, many of west Jerusalem’s cab companies won’t hire drivers like him, or will send a Jewish driver on request even though that’s illegal. Still, when his wife calls, he doesn’t like to respond in Arabic if he has a Jewish passenger: He worries they’ll become suspicious.

Gett told BuzzFeed News that claims of discrimination are misplaced.

“It’s about service,” Hermon said. “We never treat one driver differently than another.”

Hermon said Gett developed the Mehadrin option in response to customer feedback. This arrangement, she said, is a part of modern Yerushalayim life: If Gett did not have the Mehadrin option, then the city’s frum communities would boycott them, as they do with most businesses open on Shabbos.

Uber, which launched in Israel in 2014, does not have a specific fleet catering to the frum community. For now, Israeli law forbids the popular UberX system, in which a registered driver can turn their private car into a cab.

Gett and Uber also do not operate in the Palestinian areas, where Palestinian telecommunication companies in the West Bank and Gaza do not enough bandwidth for their own access to 3G internet yet.

Abu Tir of Gett feels it in the subtleties of interactions. At a previous cab company where he worked for three years, he went by the name Amir instead of Ahmad: He chose a more ethnically ambiguous name, he said, after people repeatedly canceled on him because of his distinctively Arab name and look.

The rider said she would cancel rides with Arab drivers. Gett told her they didn’t want her business.

Now he can’t do that at Gett, as each rider receives his registered name, picture, phone number, car type, and license plate with every order. On the one hand, he thinks this provides an improvement: Some Jewish passengers, he reasoned, feel more comfortable getting in the cab knowing that Gett is tracking the interaction. Like many Gett drivers, Abu Tir works for both a Yerushalayim taxi company and picks up customers via the app to maximize his time. Still, after the violence surrounding last summer’s Gaza War, including some alleged attacks on Arab cab drivers, he said he’s looking to leave the business.

When Herzel Moshe, 60, first joined Gett in 2012, he said there “were a lot” of incidents of riders canceling on Arab drivers. Moshe has been driving cabs for over 30 years and is now Gett’s Yerushalayim city manager with a small operating office adjacent to a gas station.

“At the beginning it [Gett] was something different,” he said. “As I told you, many stations did not take Arab drivers like Gett.”

Now, according to Moshe, dropped orders happen less and less because of two changes.

“They know all the drivers,” he said, pointing to a Palestinian driver in the office, calling him a veteran. “They have the Gett Mehadrin option.”

Hermon, Gett’s marketing director, said that riders cancel orders for many reasons and it was impossible to say if riders were specifically dropping Arab drivers, because the app has no way to track this and the company does not distinguish between Arab and Jewish drivers. If a rider repeatedly drops orders, they build up “bad karma” in the system, she said, which can lead to the suspension of their account for various periods.