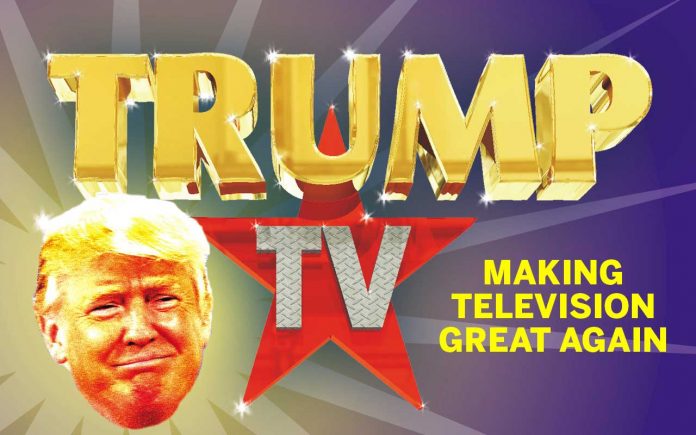 On a Wednesday night last month in Cedar Rapids, Iowa, it was just like old times for Right Side Broadcasting.

Live on YouTube, hosts Steve Lookner and Liz Willis interviewed people sporting “Make America Great Again” hats, who waited eagerly in line to watch President Donald Trump take the stage at a jam-packed, campaign-style rally. Some of the Trump fans doubled as Right Side fans, and asked Lookner and Willis to pose for selfies in their branded polos.

Once the event started, Right Side streamed Trump’s remarks in their entirety, just as it did hundreds of times during a presidential race that vaulted this Auburn, Alabama, start-up from internet obscurity to a media partnership with the Trump campaign.

But nights like this one have been rare since Trump pulled off an upset victory in November.

After generating $1.1 million in advertising revenue and donations in 2016, Right Side entertained grand expansion plans. Founder Joe Seales told Business Insider last fall that he wanted to add news shows to his company’s YouTube channel and build toward 24-hour programming.

Instead, Right Side has been forced to cut back amid steep revenue declines. A staff of 12 is down to four. Shows hosted by Mike Cernovich, Wayne Dupree, Margaret Howell and Nicholas J. Fuentes have been canceled.

Far from seeing a gusher of donations from energized Trump supporters, Seales said he has been propping up Right Side Broadcasting with money from his own pocket.

“I think a lot of them feel like the mission has been accomplished,” Seales said of the president’s backers. “I think that after Trump won, people thought, ‘Well, hey, our job is done.’ Our donations went down significantly after the campaign. I think everybody sort of has that feeling of, ‘Why are you guys still doing this? Trump won.’ ”

What if Trump hadn’t won? Teaming up with Right Side on webcasts before Election Day fueled speculation that the former reality TV star might launch a television channel, if the vote didn’t go his way. When CNN asked campaign chief executive Stephen K. Bannon about the prospect of “Trump TV” in October, the former Breitbart News chairman smiled and said, “Trump is an entrepreneur.”

According to Seales, Right Side never discussed going into business with Trump in the event of a defeat.

“We always kept the door open,” Seales said. “Nothing was ever discussed, but if Trump ever came to us, had he lost, and said, ‘Would you be interested?’ we’d be foolish not to listen to him because he’s a good businessman.”

Seales knew, of course, that Trump’s victory meant the billionaire would be otherwise occupied. He also knew that Right Side’s No. 1 source of content, rallies, would mostly disappear after Election Day.

Yet he still believed the company could thrive under a Trump presidency, perhaps not as Trump TV in any formal capacity but as an alternative to the mainstream press. Seales figured Right Side would save a lot of money on travel in a non-campaign year. He also “thought we had a good chance of getting in” to cover the White House.

“We had a number of people inside the campaign, now in the administration, who told us they would be able to help us,” Seales said. “I don’t want to call anybody out, but we sort of thought we would be in the mix there. They probably had good intentions, and they probably got in and found out things are done a different way. I’m not blaming that for our lack of success. I take responsibility for that, as a business owner.”

“We have pretty much lost touch with everybody in the administration who was in the campaign,” Seales added. “We still have pretty close ties to people who are left over in the campaign that is still operating. We still work with them at each rally.”

A bigger problem, however, is that popular Right Side videos just aren’t bringing in ad money like they used to. Like many YouTube-based companies, Right Side does not sell ads directly but relies on YouTube to place commercial spots on its clips. In March, YouTube adopted a narrower definition of what it calls “advertiser-friendly content.”

As a result, according to Seales, Right Side is getting more and more messages YouTube rejecting its videos for “monetization.”

Seales also has observed that some YouTube channels appear to pirate TV networks’ video feeds of live events featuring Trump administration officials. Seales said he is unwilling to do the same, but integrity has a price.

“We can’t compete with that, and these people are presenting themselves as legitimate news channels,” Seales said. “It’s really tough for us to contend and play by the rules.”

After holding high hopes for a big year in 2017, Seales now is looking toward 2019, when Trump presumably will return to the campaign trail.

“It’s just come to a point where it’s hard to justify keeping our operations ongoing the way they have been,” Seales said. “We definitely believe that we have a purpose; it may only be during elections.”