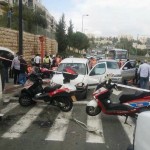 As I prepare for an upcoming visit to Israel, I can’t help but feel a twinge of apprehension. How could it be otherwise? The recent vehicular terrorist attacks in Jerusalem inevitably make every visitor to the city wonder who will be the next victim.

The seeming randomness of the attacks is particularly terrifying-exactly as the killers intend. The attacker doesn’t need any bomb-making skills or expertise as a sniper. He doesn’t have to elude security check points or Israeli army patrols. All he has to do is get in his car and step on the gas pedal. He can strike anywhere, any time.

And yet if you walk down any street in Jerusalem this morning, you will see Israelis going about their daily lives as they always do. They don’t seem especially worried. They’re not going to stop taking the train. They know that a crowd at a bus stop or outside a movie theater or on a corner waiting for the green walk signal could be targets too. Life has to go on. Israelis don’t worry because they have no choice. Visitors worry because they do. They can and will soon return to their home countries, where standing on a street corner is not a life-endangering action. That is a difference between the lives of Americans and Israelis that can’t be bridged.

Yet there is another, and very important, difference. The average Israeli can’t do much about Palestinian terrorism. But the average American Jew can.

Israelis have little choice but to rely on the police and the army to continue doing everything possible to preempt the terrorists in their on-going genocidal war against them. American Jews, however, have the ability to take political action that could make a real difference in the fight against Palestinian terrorism.

Let us recognize that “car terrorists” do not simply appear out of nowhere. Abdel Rahman al-Shaludi, who carried out the Oct. 22 attack, had twice served time in prison for terrorist activities. His uncle, Mohiyedine Sharif, was a senior Palestinian terrorist who was killed in an intra-Arab feud in 1998. Ibrahim al-Akari, who perpetrated the Nov. 5 attack, was the brother of Musa al-Akari, who was convicted in the kidnap-murder of an Israeli border policeman and was freed in the Gilad Shalit prisoner exchange.

Al-Shaludi and al-Akari are the products of a society, and a culture, in which murdering Jews-whether by bomb, knife, or automobile-is praised and rewarded. Remember “It Takes a Village,” the children’s book by then-U.S. Senator Hillary Clinton? She argued that it is not just the immediate family that influences a child, but also one’s neighbors, culture, and community standards.

What influenced Abdel Rahman al-Shaludi and Ibrahim Akari to become “car terrorists”? One source was the Palestinian Authority’s leadership and social media.

Exhibit A: Sultan al-Einen. He’s a senior adviser to Palestinian Authority president Mahmoud Abbas and a member of the Central Committee of Fatah, which is the largest faction of the PLO (the PA’s parent body) and is also chaired by Abbas. He’s not quite the Palestinian equivalent of Valerie Jarrett or (until recently) David Axelrod, but he’s up there.

Palestinian Media Watch has compiled a long list of statements by Einen praising terrorists. But the one that attracted the most attention was his public praise, in May 2013, of a terrorist who stabbed to death an Israeli father of five. Einen said the killer was a “heroic fighter” and called for “blessings to the breast that nursed him.” In response, five members of Congress-Republican Ed Royce (Calif.) and Democrats Eliot Engel (N.Y.), Nita Lowey (N.Y.), Ted Deutch (Fla.), and Brad Sherman (Calif.)-wrote to Abbas, demanding that he fire Einen.

After the car attack by al-Shaludi two weeks ago, Einen publicly hailed him as a “heroic martyr” and charged that Israel “murdered him in cold blood.” Fatah’s Facebook page is replete with cartoons extolling “car terrorism” and urging viewers to “Hit the gas at 199 [km/h] for Al-Aqsa.”

Now is the time for American Jews to ask those five members of Congress to take action-not just another letter that Abbas will ignore, but the imposition of penalties that Abbas cannot ignore. Here’s one idea: from now on, deduct the cost of medical treatment for victims of Palestinian terrorism from the $500-million that the U.S. gives the Palestinian Authority each year. Make them pay for the damage they cause.

There are many other ways in which American Jews, working closely with friends in Congress, can force Mahmoud Abbas and the Palestinian Authority to stop praising and glorifying terrorists. That would be the first, important step in the process of changing the culture in Palestinian villages that is raising children to become “car terrorists.”

Stephen M. Flatow is a New Jersey attorney whose daughter Alisa was murdered in a 1995 bus bombing by the Palestinian terrorist group Islamic Jihad.