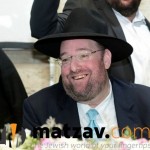 I recently heard a beautiful story from Shlomo Yehuda Rechnitz, whose unusual generosity has enhanced the lives of so many. Here is the story for Matzav.com readers.
One time he found himself in Shannon, Ireland, on a stopover on the way to Eretz Yisroel. He noticed that there was a group of hundreds of Amercian solders, some of whom were eating out of paper bags, eating their lunch.
He walked over to them and started to ask them, and he found out that their meals were terrible. They were having these horrible, non-tasty meals out of these paper bags. He decided he is going to do something about it. So he went over to the commanding officer and said, “Sir, how many soldiers do you have in your battalion?”
He said, “About 350, 400 of them.”
He told him to take his credit card and tell each one of them that they can go in to town and have a fifty dollar meal on him.

Word spread quickly after he convinced the commander that he wasn’t kidding around. They were awed by his generosity. They were mechabed him with a little bit of a drasha. I saw the video of it (see below), where he thanked them and he told them of the concept of hakaras harov, appreciating what others do for you.

“The reason why I and my family are able to be safe is because people like you keep us safe,” he said.

After he finished to a round of applause and standing ovation, a fellow walked over to him. He said, “Sir, I want you to know something. I’m from Kentucky. We are all from Kentucky, Alabama, Tennessee.. and there are not many Jews around there. I happen to put on tefillin every day. To be honest with you my fellow soldiers make fun of me, not because they are anti-Semetic, just they think I’m a weirdo, I have horns. I have been the butt of all their jokes. And now, because of you, tomorrow I am going to be the hero because they saw what Orthodox Jews are all about.”

That really in a very beautiful way shows us what our mission is on this earth. Our job here is to sanctify and glorify the Ribono Shel Olam’s name by the way we act and behave. The people should look at Torah Jews and said, those people are heroes. They are the ones doing G-d’s work.

Today, you have the opportunity to make an Orthodox Jew into a hero. What are you going to do about it?