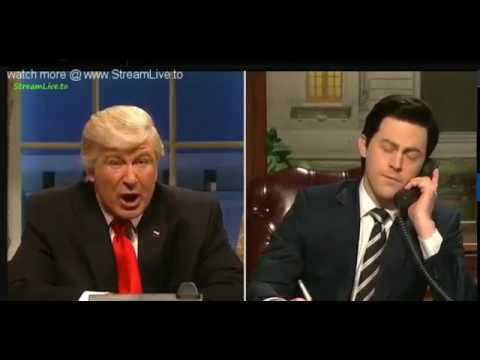 For the first time since Donald Trump’s inauguration as president of the United States on January 20, actor Alec Baldwin returned this weekend to an NBC satire show to impersonate and spoof the real estate mogul-turned-commander-in-chief, opening his skit with a Jewish reference.

“You know,” Baldwin-as-Trump — wearing a Russian flag lapel pin — says to an aide, “I love my daughter, Ivanka, and her husband, Jared [Kushner]. They always keep me so calm, and make sure that I don’t do anything crazy.”

“So, quick question,” the Trump character says. “Are they gone?”

“Yes,” answered the aide. “They don’t work on Shabbat.”

“Perfect,” Baldwin (as Trump) answers. “When the Jews are away, the goys will play.”

The rest of the skit, which lampoons Trump’s performance in the diplomatic arena thus far, shows Baldwin engaging in phone conversations with the leaders of Australia, Mexico, Germany and Zimbabwe — with top White House adviser Steve Bannon, the former editor of Breitbart, depicted as the Grim Reaper, by his side.

Trump’s response to the parodying in general and Baldwin’s sketches in particular has been negative. Among his social media attacks, he tweeted in December: “Just tried watching… unwatchable! Totally biased, not funny and the Baldwin impersonation just can’t get any worse. Sad.”