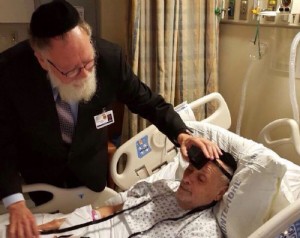 In his work with sick patients over the past 30 years, Rabbi Avraham Lider has witnessed some extraordinary moments and literal miracles in his position as Director of the Ahavas Chesed organization based in Crown Heights.

10 days ago, a social worker from a New York hospital urgently called Rabbi Lider at home.

“There is a lady here who needs to speak to you right away,” the person said. “Her husband is in the ICU, she is sitting by his bedside. His condition is extremely critical, and he is not expected to make it. Can you come to speak with her?”

Rabbi Lider dropped what he was doing, and immediately came to the intensive care unit where he found the patient attached to life support machines. The anguished wife was waiting to speak to the rabbi.

“Rabbi,” began to tell him a startling story.

“I’m a Muslim,” she said. “My husband, however, is Jewish and he is dying. We have been married for 27 years, but it is his wish that even though he didn’t live like a Jew, he wants to be buried as a Jew.”

Rabbi Lider nodded in understanding. Before he was able to respond, the woman continued.

“Rabbi, listen to me,” she said. “I have pressing family matters to take care of, and I need to travel back to Turkey tomorrow. When my husband dies, please make sure to bury him as a Jew. I think he will want to have a Jewish burial. Can you help, please?”

Rabbi Lider was astounded and managed to tell her that we Jews plan Bris Milah ceremonies, Bar-Mitzvahs and weddings. “We don’t really pre-plan funerals!” she noted.

She insisted, “If my husband dies in the meantime I want to give you a letter giving you full authority in writing to bury him and be in charge, in case I am not around.”

Rabbi Lider could not persuade her against this, so he agreed to accept the note giving him authority.

The rabbi went to the man in the ICU, and prayed for him by his bedside. He came to that bedside every single day, said a Misheberach for him and talked to the unconscious man.

Meanwhile, the man’s wife left for Turkey, torn between her husband and her family obligations.

Astonishingly, the man got better, and after 4 days he opened his eyes. Gradually, his tubes and wires were disconnected, and he was transferred to a regular room.

Now that he was awake and alert, Rabbi Lider was able to chat with him, and asked his name.

“My Hebrew name is Yitzchak,” replied the patient.

The rabbi grinned. “Tell me, do you like kosher chicken soup?” he asked the sick man.

“I love it,” said the patient.

The next morning Rabbi Lider came by again, bearing a pot of delicious chicken soup. After enjoying the chicken soup, the patient then put on tefillin, for the first time in 70 years.

With tears in his eyes, he said “Shema Yisrael” with the Chabad rabbi.