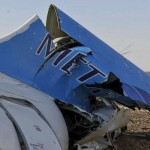 The White House said for the first time that it is “likely” that an ISIS bomb brought down a Russian jet over the Sinai last month, Shane Harris reports for the Daily Beast.

“While the Egyptian-led investigation has not officially concluded, we assess it is likely that this was an ISIL terrorist attack,” a White House spokesperson tells The Daily Beast. “We are continuing the enhanced security measures Secretary Johnson announced on November 6 and will continue to work closely with partners to find the perpetrators of this terrorist attack and bring them to justice.”

This comes hours after ISIS published a photograph of the alleged improvised explosive device used to take down the flight. And on Tuesday, Russian President Vladimir Putin said that an ISIS bomb was behind the disaster.