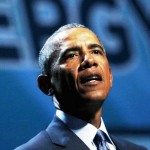 White House spokesman Eric Schultz said Tuesday President Obama may have been “a little too flip” in referring to some of his opponents as “crazies,” but denied that those opponents are exclusively people who disapprove of the Iran Deal.

Schultz assured reporters that the President didn’t regret his language though.

The comments, which Schultz alleges were aimed at Republicans in Congress, came during a Las Vegas fundraiser Monday night. Read more at The Hill.