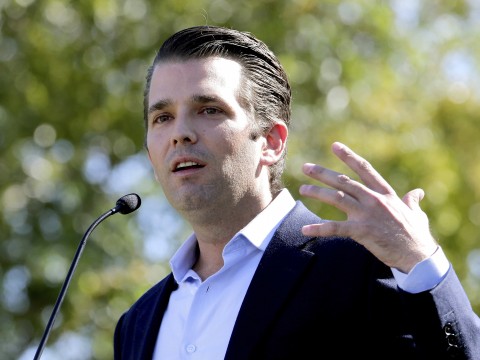 The White House on Monday was forced to shift from denying contact between the Trump campaign and Russia to defending a meeting that President Donald Trump’s eldest son had in the midst of the presidential race with a Russian lawyer purportedly offering damaging information about Hillary Clinton.

The White House sought to play down the significance of that encounter even as new details emerged indicating that it had been arranged at the behest of a Russian family that has ties to the Kremlin and a history of pursuing business deals with President Trump – including preliminary plans for a Trump Tower in Moscow.

The controversy deepened late Monday with a new report that Donald Trump Jr. had been informed via email that the information on Clinton was part of a Russian government plan to help his father’s campaign. The New York Times, which broke the story, cited three unnamed people who had seen the email.

The revelations put the Trump administration again on the defensive about its relationship with Moscow. White House spokeswoman Sarah Huckabee Sanders said Monday that the president had learned of his son’s meeting with Russian lawyer Natalia Veselnitskaya only “in the last couple of days” and sought to play down its significance.

She appeared to be referring to updated federal disclosures filed by Trump’s son-in-law and close adviser, Jared Kushner, acknowledging that he had attended the meeting with Veselnitskaya in Trump Tower.

Asked whether the president was concerned about the encounter, Sanders said no and described such meetings as routine occurrences during campaigns. “Don Jr. didn’t collude with anybody to influence the election,” she said.

Trump Jr. said in an interview earlier this year with the New York Times that he had not participated in any “set up” meeting with a Russian individual. Then, after learning that the Times planned to publish an article about his meeting with Veselnitskaya, Trump Jr. provided evolving explanations for what had been discussed.

At first he said the talk centered on policies restricting the ability of U.S. families to adopt Russian children. Then, on Sunday, he issued a statement acknowledging that the premise of the meeting was that Veselnitskaya claimed to have potentially damaging information about Clinton.

Trump Jr. said that Veselnitskaya failed to deliver and that “it quickly became clear that she had no meaningful information.” But his participation on those terms, as well as the attendance of Kushner and then-Trump campaign aide Paul Manafort, amount to fresh evidence that the Trump campaign was willing to consider accepting help from a Russian source tarnishing Clinton.

On Monday, New York lawyer Alan Futerfas confirmed that he had been hired to represent Trump Jr. in the Russia probes.

New details from others involved in arranging the meeting point to other Trump links to Moscow. The session was set up at the request of Emin Agalarov, a Russian pop star whose Kremlin-connected family has done business with Trump in the past, according to the person who arranged the meeting.

Rob Goldstone, a music publicist who represents Agalarov, confirmed Monday that he requested the Trump Tower meeting at Agalarov’s request. Emin Agalarov and his father, Aras Agalarov, a wealthy Moscow real estate developer, helped sponsor the Miss Universe pageant, then owned by Trump, in Russia in 2013.

After the pageant, the Agalarovs signed a preliminary deal with Trump to build a tower bearing his name in Moscow, though the deal has been on hold since Trump started his campaign for president.

Goldstone previously told The Washington Post that he set up and attended the meeting so Veselnitskaya could discuss the adoption of Russian children by Americans.

In a new statement, Goldstone confirmed what Trump Jr. said Sunday: that he enticed the then-candidate’s son by indicating that Veselnitskaya could provide damaging information about Democrats.

“The lawyer had apparently stated she had some information regarding illegal campaign contributions to the DNC which she believed Mr. Trump Jr. might find important,” he said.

She then proceeded to discuss the Magnitsky Act, a 2012 U.S. law that imposed sanctions on Russia for its alleged human rights abuses. Angered by the law, Russia retaliated by halting U.S. adoptions of Russian children.

Trump Jr. has said his father was unaware of the meeting, and both he and Goldstone said there was no additional follow-up after the brief June 2016 session.

The New York Times reported late Monday that it was Goldstone who had emailed Trump Jr. before the meeting indicating that the negative material about Clinton was related to a Russian government effort to assist the Trump presidential campaign. On Sunday, Goldstone had told The Washington Post that he did not believe the Russian government was involved with seeking the meeting and that he could not recall if he had told Trump Jr. if Russians would participate in the discussion. Goldstone did not respond to requests for comment regarding the Times report late Monday.

Futerfas, Trump Jr.’s attorney, issued a statement late Monday that neither confirmed nor denied the Times report about the email. He called the June meeting “much ado about nothing” and said Trump Jr. believed he was being offered information about “alleged wrongdoing” by Clinton in her dealings with Russia. “Don Jr.’s takeaway from this communication was that someone had information potentially helpful to the campaign and it was coming from someone he knew,” he said.

The involvement of the Agalarovs brings the meeting closer to Trump’s past business interests and to the Kremlin. Trump has spent time with both Emin Agalarov and his father – appearing in a music video for the pop singer that was filmed at the Moscow Ritz-Carlton hotel in 2013.

The Agalarovs are also close to Russian President Vladimir Putin. Aras Agalarov’s company has been awarded several large state building contracts, and shortly after the 2013 pageant, Putin awarded the elder Agalarov the “Order of Honor of the Russian Federation,” a prestigious designation.

A spokesman for the Agalarovs declined to comment Monday.

Emin Agalarov told The Post in an interview in April 2016 that he had spoken with Trump numerous times about the need to build stronger ties between Russia and the United States.

“He kept saying: ‘Every time there is friction between United States and Russia, it’s bad for both countries. For the people to benefit, this should be fixed. We should be friends,’ ” Agalarov said about his conversations with Trump.

Agalarov said then that he and his father had met Trump after reaching out to the Miss Universe company to hire models for one of his music videos. Later, they decided to bid to bring the pageant to Moscow, ultimately paying about $14 million to host the event.

He said they continued to be friendly with Trump, including sending him a note to wish him good luck on Super Tuesday on March 1, 2016.

“I wish he’s going to become president of the United States, not because I have a personal interest, but I think he’s going to be actually good for the Americans and Russians,” Agalarov said in the 2016 interview.

In March, Emin Agalarov told Forbes that Trump wrote him a note in November after he congratulated him on his election win and that he and Trump Jr. had exchanged messages as recently as January.

“Now that he ran and was elected, he does not forget his friends,” Agalarov told Forbes.

On Monday, the Kremlin said it was unaware of the meeting between Trump Jr. and the Russian lawyer.

“We do not know who that is,” Peskov said of Veselnitskaya.

Veselnitskaya has for the past several years been a leading advocate around the world to fight policies imposed on Russia for alleged human rights abuses, policies that Putin and other leading Russian officials have vehemently opposed.

Trump officials have vigorously denied that they colluded with Russia in any way.