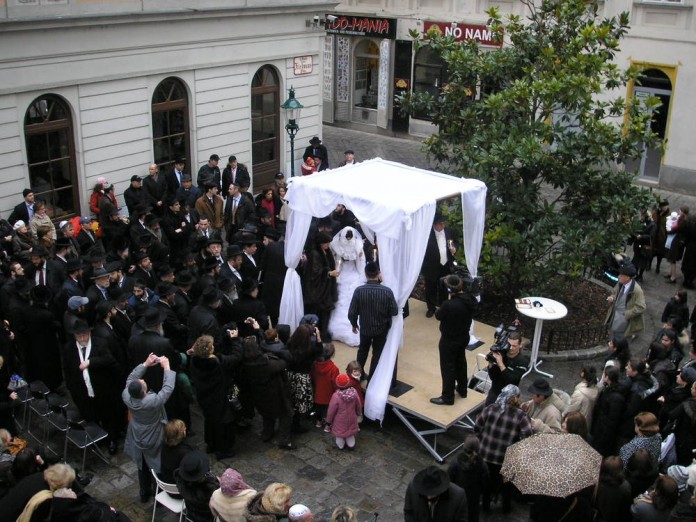 Mazel tov! After weeks of sleepless nights and an inordinate amount of phone calls, Ari, the “best boy” in his Yeshiva, and Leah, the “biggest Baalas Chesed” in her community, have decided to get engaged. Now, after exchanging gifts and choosing a wedding date, hall, photographer, band, florist, printer, and of course – color scheme, they are ready for the truly important question: Who will be Mesader Kiddushin (officiate) at the wedding? TheKallah comes from an illustrious family, and her maternal grandfather is a well-known Rav, while the Chassan learns in a prestigious Yeshiva and hisRosh Yeshivah is also a Talmid Chacham of note. So who gets to choose?

In fact, this question has been a topic of discussion – and debate – for many, many years.

The Gemara2 warns that one who does not know the Halachos of divorce and marriage well, should not involve himself with the divorce or marriage proceedings and their laws. Rashi tells us that such a person should not be a Dayan, a judge, in this area because perhaps he will say that something is permitted when it is really prohibited and he can cause irreparable damage. For example, if a woman is Halachically married to one person, and she marries somebody else based on an erroneous P’sak that this first marriage is not valid – aside from the sin that the uninformed rabbi has caused – the woman’s children will be Mamzeirim, illegitimate children, a defect that lasts forever3.

Indeed, the Shulchan Aruch4 rules that one who is not an expert in the laws of divorce and marriage should not involve himself with these laws, adding the expression: “le’horos bahen” – to rule in these matters.

The Taz points out that the Shulchan Aruch is speaking specifically about someone who is issuing P’sakim in matters of divorce and marriage. However, if someone wants to be Mesader Kiddushin — which is basically a straightforward, pre-scripted ritual — one may do so, even if he is not an expert in the laws of divorce and marriage5. This also seems to be the opinion of Rashi, who says only that one shouldn’t be a Dayan in these matters, implying that officiating at a wedding would be permitted. This is also the opinion of the Meiri6 and the Beis Shmuel.

However, the Shevus Yaakov7 argues very strongly that if someone is not familiar with the laws of divorce and marriage, then he should not be Mesader Kiddushin. He explains that if the Mesader Kiddushin does not know what he is doing, the Chassan and Kallah may end up being married in a prohibited manner.

Very often, it is the Mesader Kiddushin who is takes the responsibility for all that goes on under the Chuppah; he is not there simply to recite theBerachos. He is the Rav who is being relied upon to check out the Yichus and background of the Chassan and Kallah, and any other Halachic matters that need to be investigated. Therefore, the Shevus Yaakov holds that being Mesader Kiddushin does fall into the category of “le’horos bahen” –paskening in these matters. He backs this up with a Minhag of his time, which was to choose only Rabbanim Mumchin – expert Rabbanim – for theSiddur Kiddushin.

The Knesses Yechezkel, in a letter to the Shevus Yaakov, argues with him and sides with the Taz, that since the wedding procedures are uncomplicated, the rabbi does not have to be an expert in order to officiate.

The Takana of Rabbeinu Tam and the Rambam

However, the Knesses Yechezkel writed, that Rabbeinu Tam instituted a Takana in the Kehillos of Ashkenaz – similar to what the Rambam8instituted for the Sephardim. In those days, due to the difficult and often treacherous traveling conditions, the residents of the outlying villages often found it too complicated to bring in an experienced Rav from the main cityto act as the Mesader Kiddushin. Instead, they would have the Shamash or the localShochet — who was often the acting Rav — serve as the Mesader Kiddushin at their weddings. This led to many Halachic issues, and often resulted in severe breaches of Halacha. And so, Rabbeinu Tam and the Rambam made a Takana — each in their own Kehilla — that only a person who hasSemicha in these areas may be Mesader Kiddushin9.

The Chasam Sofer writes that in his days, when Kehillos would hire a Rav, the regular salary of the Rav was not adequate to support him. To supplement his income, the Kehilla would grant the Rav exclusive rights of Siddur Kiddushin in the city and he would receive payment for eachKiddushin he would perform. Thus, the Siddur Kiddushin was automatically given to the Rav of the city where the weddingtook place. Hence, theRama10 rules that if another Rav is brought to be the Mesader, he would have to pay the Rav of the city the amount he would have received for officiating; if not, it would be considered outright theft, since the payment for being Mesader Kiddushin was considered part of his salary11.

In truth, although according to Halachah a visiting Rav was able to be Mesader as long as he pays the local rav for the rights, the custom was generally not to do this.

But what happens, as in our case of Ari and Leah, if the Chassan wants one Mesader Kiddushin and the Kallah wants another?

According to the Acharonim, following the basic Halacha (Me’Ikar HaDin) the primary obligation of reciting the Birchos Eirusin – the blessingspreceding the Kiddushin – lies on the Chassan. However, it is our custom to give this honor over to the Mesader Kiddushin since there was a point in time in which not every Chassan knew how to recite a Beracha properly,and we did not want to embarrass those who were unable to recite the blessings on their own. Thus, the Minhag became, that even if the Chassan knows how to recite the Berachos, his Rosh Yeshiva or Rav would acts as his Shaliach, his agent, and recite them in his stead. It would seem that since the Siddur Kiddushin entails carrying out the primary obligations of the Chassan and acting as his agent, it is the Chassan who would be entitled to choose the officiating Rav.

It would seem that the one who is Mesader Kiddushin should make sure that he is an expert in these Halachos and that he has permission to involve himself in these matters — either in the form of Semicha, or as an official Reshus from experts in Siddur Kiddushin — so that he does not go against theCherem or Takana of previous generations. This, despite the fact that the Siddur Kiddushin today doesn’t belong to anybody specific, and that it is theChassan‘sright to give it to whomever he wants.

Now that they have been clued into the Halacha, Ari and Leah and their families are very happy to follow the prevalent custom, and to give the honor to Ari’s Rosh Yeshivah, who is most definitely an expert in the laws of divorce and marriage. And he will be more than happy to be the Shaliach for his prized pupil at his upcoming wedding.

1 Based on a Daf Yomi Shiur on Kiddushin 6a

3 Taking this one step further, the Talmidei HaRashba in the name of the Raavatz write that if a person does not know the Halachos pertaining to marriage and divorce, he should notrule in any related matter at all, even in an area that he is familiar with. This is because once he starts ruling in one aspect of these laws, he may come to rule in other areas in which his understanding is not as clear, which may lead him to make a mistake. The Meiri, too, weighs in and says that if a person Paskens in these areas despite his lack of thorough knowledge, he will not know when the Halachah requires him to be more lenient or more stringent, and here too, he can cause irreparable damage — for which he will be liable. On the other hand, says theMeiri, one who is fluent in these laws will know when there is a doubt and will know to ask an authority who is capable of handling more complex situations.

5 However, regarding a Get, which involves Shailos of the spelling of names of the parties and other complicated questions, even the Taz would agree that the officiant must be an expert in these matters.

8 See Teshuvos HaRambam, where he cites the Cherem instituted by the Bais Din of Mitzrayim.

9 The Knesses Yechezkel also notes that the Gemara speaks of one who is not an expert in the laws of divorce and marriage – putting divorce before marriage. He writes that when he was young, they used to say that one has to be an expert in the marriage that comes after the divorce, referring to aZivug Sheni – second marriage – because that is where more Shailos tend to arise.

11 See Divrei Malkiel (4:119) for a story that illustrates the above Halacha