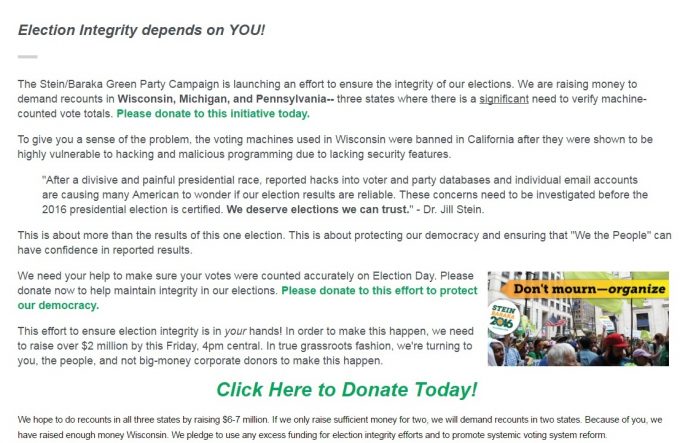 On Wednesday afternoon, near the start of one of the year’s final news droughts, former Green Party presidential candidate Jill Stein announced a new campaign: to pay for recounts in Michigan, Pennsylvania and Wisconsin. The news went first to the journalist Greg Palast, then on Stein’s Facebook page, then in an interview with the Russian propaganda channel RT.

“This has been a hack-riddled election,” Stein explained. “We have voting machines that are extremely hack-friendly in an election that’s been very contentious.”

Stein’s fundraising goal was $2.5 million – and donors blew right past it. At that point, as New York magazine first reported, the goal spiked to $4.5 million, and new language on the donation page admitted that costs could rise higher. “The costs associated with recounts are a function of state law,” wrote the Stein campaign. “Attorney’s fees are likely to be another $2 (million) -3 million, then there are the costs of the statewide recount observers in all three states. The total cost is likely to be $6 (million)-7 million.”

It’s a lot of money, especially for the Green Party. Stein’s 2016 campaign, the party’s most electorally potent since 2000, took in $3,509,477 from donors. As of Thursday afternoon, the recount effort had raised $3,875,502. It’s the largest donation drive for a third party in history – so what’s actually going on?

The Green Party has done this before, to little result. In 2004, when many Democrats asked whether Ohio had been lost to voter suppression, the Green Party teamed up with the Libertarian Party to pay for a recount. David Cobb, the then-presidential candidate for the Green Party, had not even appeared on Ohio’s ballot, but he helped raise $150,000 to start the recount process. “Due to widespread reports of irregularities in the Ohio voting process,” said Cobb and Michael Badnarik, the then-presidential candidate for the Libertarian Party, “we are compelled to demand a recount of the Ohio presidential vote. Voting is the heart of the democratic process in which we as a nation put our faith.”

The result: Democrat John Kerry gained a bit less than 300 votes on George W. Bush, making virtually no difference in the margin.

The inspiration for the recount: Theories ranging from sketchy to debunked. In 2004, Greg Palast was the most prominent of several analysts arguing that more Ohio voters intended to elect Kerry than Bush, but enough ballots were rejected and spoiled to stop them. He did similar work in the run-up to 2016, warning that voter suppression was going to “steal the vote” in key states.

“Being right never felt so horrid,” Palast wrote after the election.

Palast has celebrated and promoted the new effort, which could turn up additional votes as ballots are re-scanned. But the recount won attention because of an unrelated theory: That electronic voting machines might have been attacked by hackers. The Twitter hashtag #AuditTheVote was trending days before the Stein campaign began, and stories of how machines *could* be hacked have begun being shared again.

But voting machines can’t be hacked from afar, and the people with the most to lose – Democrats, who literally lost – haven’t been convinced that machines were hacked. They closely monitored Election Day, with volunteers at every swing state polling place, as is customary.

The Greens themselves have not endorsed any theory of what went wrong. The closest they’ve come was in Stein’s RT interview, where she said “reports have come in from cyber experts, from security experts and others.” There you go.

If the election were hacked, a recount couldn’t prove it. Most of Pennsylvania voters use DRE (direct record electronic) machines, with no paper ballot whatsoever. In other races where those machines have been probed – like Virginia’s 2005 attorney general contest – the recount has consisted of the machine results simply being scanned again. The lost/spoiled votes Palast has talked about are not part of that system. (Meanwhile, nearly every Michigan vote has a paper record.)

The cost keeps increasing. In a Facebook video announcing the campaign, Cobb – now Stein’s campaign manager, rattled off $2.1 million in potential costs. “In order to file, we need to raise $1 million just to send to the state of Wisconsin,” he said. “Pennsylvania’s is another $500,000. After that, we’re looking to file in Michigan, where it’s $600,000.” The pleas for attorney fees is above and beyond what the party did 12 years ago. One reason? Pennsylvania’s actual recount deadline has passed – the Greens are raising money to go to court.

But (most of) the money is headed for the recount effort. According to local reporters, the targeted states are already preparing to carry out the recounts. Stein’s campaign is telling the truth about the recount costs. The campaign does offer a separate way to support local Green parties (for ringing alarms about the vote), but this reads less like a way to fund the party than a way to promote it as an alternative, as in 2004.

Stein doesn’t claim that the recount will elect Hillary Clinton. That desire has motivated many donors, but Stein spent much of 2016 telling interviewers that the Democratic nominee was more dangerous than Donald Trump. In her own comments since the recount effort began, she described the election as “hacked,” but doesn’t say that the wrong result came out of it.

“We need a voting system that allows us to bring our values to the vote,” Stein told RT, spending much of the interview to plug ranked-choice voting and open debates.

Stein has also used the fact that Democrats won’t push for recounts as evidence that the party is corrupt. On RT, she scoffed that “you’d think that the Democratic candidate, who has more skin in the game here, would be more involved.” According to Palast, Stein told him that “Democrats do not act to protect the vote even when there is dramatic evidence of tampering.”

Some Clinton fans are on board. That’s obvious from the speed of the money drive, but it’s been accentuated on Twitter. Adam Parkhomenko, the co-founder of the “Ready for Hillary” group that organized supporters ahead of her run, has praised Stein for “leading” on the recount.

Other dabblers in the election story have promoted the recount as a fair-enough answer to Republican election challenges in places like North Carolina.

More Clinton fans see this as a waste of time – at best. Someone was going to tap into mounting liberal anger that – for the second time this century – a Democrat has lost the presidency while winning the popular vote. But Democrats can’t believe that the someone was Stein. In all three of the contested states, Stein campaigned for votes; in Michigan and Wisconsin, her total was greater than the gap between Clinton and Trump.

For Democrats, Stein’s role in the campaign resurrects some of the worst aspects of the campaign. It directs liberal anger toward a hopeless goal. It feeds into a Russian story line promoted on RT – that American democracy is awfully flimsy, considering that the country claims to lead the world. And it helps a third party that can split Democratic votes. On Thursday afternoon, a few Democrats suggested that people reaching for their credit cards in anger were ignoring an actual, achievable cause.

Louisiana’s low-profile Senate runoff, in which Democrat-turned-Republican John Kennedy is heavily favored, takes place on Dec. 10. Foster Campbell, the populist Democrat who made the runoff, has raised just $1,461,752 – or less than half as much as the recount campaign raised in a day.