“Of course a person should do teshuvah, but I am a bit puzzled. I observe Shabbos, I keep kosher and taharas hamishpachah. I daven every day,I attend a Daf Yomi shiur and I am honest in my business dealings. What exactly should I do teshuvah for?”

People may not actually say this, but some certainly think this way. Yet King Solomon said, “For there is no man so fully righteous that he always does good and never sins” (Ecclesiastes 7:20). Even the greatest tzaddik is not free of sin. How, then, can a person who is quite far from being a perfect tzaddik not feel a need to do teshuvah?

Several psychological defense mechanisms tend to discourage an individual from changing, from doing teshuvah. The obstacles to teshuvah are denial, rationalization, trivializing, projection, habituation and ego.

1} Denial
Throughout Tanach, the prophets repeatedly exhorted the Jewish people to abandon their errant behavior, but as is evident from the Scriptures, they were not very successful. Isaiah explains why. “Surely you hear, but you fail to comprehend; and surely you see, but you fail to know. This people is fattening its heart, hardening its ears and sealing its eyes, lest it see with its eyes and hear with its ears and understand with its heart, so that it will repent and be healed” (Isaiah 6:9-10). No psychology text can improve on Isaiah’s description of denial. Because people are intent on doing whatever they wish, they resort to denial, one of the best-known defense mechanisms so that they are unaffected by the reality of what they see and hear.

We are creatures of habit, and we are comfortable when we can do things without the need to exert much effort. Change is uncomfortable, and in order to avoid this discomfort, our minds block out those realizations that would call for change. The natural state of all matter-including human beings-is inertia, but one must force himself to overcome inertia in order to grow and change.

2} Rationalization
Denial enables a person to maintain the status quo. When reality threatens to overcome denial, the mind employs other defense mechanisms to reinforce the denial-such as rationalization. One of the themes in Proverbs is the tendency to rationalize. Ramchal says, “If a person is confronted with one’s laziness, one will doubtless come back with many quotations culled from the sages and the Scriptures and with intellectual arguments, all supporting, according to his misguided mind, his leniency with himself” (Mesillas Yesharim, Chapter 6).

Denial is not always possible, so the mind is very clever in rationalizing; in other words, justifying one’s actions by giving logical-sounding reasons for them. The Torah stresses the gravity of speaking lashon hara, for example, which requires both teshuvah vis-à-vis Hashem and forgiveness from the victim. Oftentimes one who speaks lashon hara may attempt to justify his behavior by claiming “But it’s the truth!” Defamatory speech is lashon hara, even if it is true.

3} Habituation
The Talmud says that when a person does a forbidden act several times, it loses its opprobrium. Habituation enables one to think that these transgressions are permissible. His conscience is lulled into thinking, It’s really not so terrible. Thus, even though the morning minyan begins promptly at 6:30 am and ends at 7:05, there are some minyannaires who habitually show up at 6:45 and leave before everyone else. They are so accustomed to arriving late and davening at breakneck speed, they see nothing wrong with it.

4} Projection
One who projects onto another will not be able to do genuine teshuvah. Sins committed against another person are not forgiven on Yom Kippur unless one has obtained forgiveness from the offended individual. The defense mechanism of projection turns things around: I did not offend him. He offended me. He should really be apologizing to me.

5} Trivializing
The tendency to trivialize halachah is another impediment in the road to teshuvah. I missed Minchah, but I was so busy at the office. Anyway, it’s not a big deal. Or, I chatted with my friend during the Reading of the Torah, but doesn’t everybody? (This is the only sin for which the Shulchan Aruch says, “There is no forgiveness.”)

6} Ego
Inasmuch as teshuvah for an offense against another person requires that one make amends and ask forgiveness, there is ego resistance to humbling oneself, apologizing and making restitution where required.

One of the axioms of human behavior is that a person will always choose to do that which is most comfortable for him. We find that an addict will not agree to change until he hits “rock-bottom,” i.e., that the pain incident to the addiction is greater than the pleasure it provides. This is equally true of the non-addict. Therefore, oftentimes individuals only agree to change when they have reached rock-bottom.

But what can constitute rock-bottom for the non-addict? A person who contemplates his life goals and sees that his behavior is jeopardizing his reaching those goals may reach rock-bottom. But this requires giving serious thought to defining one’s goals and purpose in life. Confronting death can usually lead to such introspection. I recently attended the funeral of a great talmid chacham. A man next to me said somewhat somberly, “Reb Z. is taking along with him much Torah and mitzvos. What will I be taking along?”

Uncompromised honesty is necessary to see through the psychological defenses that are a barrier to teshuvah. Rosh Hashanah, the Ten Days of Penitence and Yom Kippur are days in which one should be inspired to evaluate the meaning of one’s life. Only when we are aware that we need “fixing” will we do teshuvah.

The founder and medical director emeritus of Gateway Rehabilitation Center in Aliquippa, Pennsylvania, Rabbi Abraham Twerski, MD, is one of the country’s leading experts on drug and alcohol rehabilitation. He is the author of numerous books and his column is regularly featured in Jewish Action. 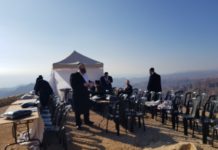