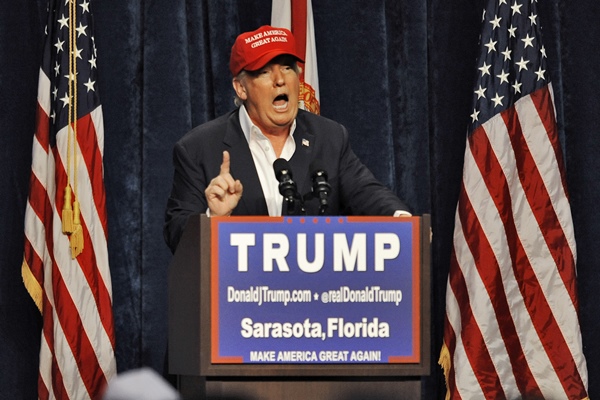 Most polls have painted an increasingly dire picture for Donald Trump’s presidential campaign, but a newly launched daily poll has been finding a very different result: Trump and Hillary Clinton are in a dead heat heading into the final two weeks before the election.

At a rally Sunday, Trump touted results from the Investor’s Business Daily/TIPP tracking poll, whose latest results, published Tuesday, showed the race about even, with Clinton at 41 percent and Trump at 40 percent. That compared to Trump’s five- and six-point deficits in the RealClearPolitics and Huffington Post Pollster averages, respectively, as of Tuesday morning, and Clinton’s five- to 12-point leads in national polls from ABC News, CNN, Fox News and Quinnipiac University released in the past week. Although random sampling error is a common source of differences in polls, the consistent difference between IBD/TIPP polls and others this month reflects a more systematic gap.

Trump has a history of citing practically any poll that shows good news for him, including reputable surveys and nonscientific click-in “polls” conducted after debates. But the Investor’s Business Daily poll appears to be a different case. Although its claim to be the “most accurate poll in recent presidential elections” requires some squinting at final vote margins, the poll shares several similarities with other public surveys that show Clinton with a commanding advantage. Indeed, the poll shows a similar standing for Trump as the USC/LA Times Daybreak survey, where an unorthodox weighting approach based on respondents’ 2012 vote has buoyed Trump’s support.

The Investor’s Business Daily/TIPP pollster, Technometrica President Raghavan Mayur, is not concerned about his poll’s current outlier status, saying, “I am able to go to bed peacefully.” Mayur described the poll’s methodology in detail to The Washington Post on Monday, providing new details and his take on why it shows the race so close.

According to Mayur, IBD/TIPP recruits respondents with live interviewers calling a random sample of cellular and landline telephones in the United States. The respondents are then asked questions about voter registration and their certainty of voting so that likely voters can be identified. This overall approach is quite similar to the sampling approach of other national media surveys such as the Washington Post-ABC News, CNN/ORC and CBS News/New York Times.

Weighting marks an area where IBD/TIPP’s poll is more unusual on two fronts. First, the poll weighs its sample of registered voters to match 2014 Current Population Survey estimates for that group by age, gender, racial and region. By contrast, the most regular national surveys weigh their overall adult samples to demographics of the voting-age population, for which benchmarks are published with greater regularity. Although the IBD poll weights to different census population parameters than other surveys, it is not clear that this would necessarily boost Trump’s support in a survey without testing.

Education also was not a weighting factor in IBD’s survey, though it is commonly used in surveys since adults with less education tend to be hard to reach in public opinion polls. This year, lower- and higher-educated white voters have diverged sharply in their support for Clinton and Trump.

A second unusual aspect of IBD/TIPP’s weighting is party identification, where the survey’s sample of registered voters is weighted to match a predetermined estimate for the share of self-identified Democrats, Republicans, independents and others. Mayur declined to provide details on the source of party identification benchmarks, describing them as proprietary, although weighting sources are a required element of disclosure for the American Association for Public Opinion Research.

Technometrica’s Mayur also shed light on the effect of the poll’s method for identifying likely voters will shift before Election Day, a key step in the pre-election poll process where practices diverge widely. The poll is classifying all registered voters who say they are “very” or “somewhat” likely to vote as likely voters. In Monday’s poll release, this is a fairly loose screen and showed no difference in the vote margin from registered voters overall, where Clinton and Trump are tied at 40 percent (they were tied at 41 percent among likely voters).

The lack of difference between IBD’s registered and likely voter results is important – it suggests that the survey’s sample of registered voters, not likely voter selection, is the chief reason the poll differs from other public surveys.

Mayur says IBD’s method will become stricter and more elaborate over the next two weeks, first by employing a 10-point scale based on questions about interest in the campaign and voting in past elections where those scoring seven or above make the cut. In its final estimates, Mayur explains that the poll will tweak this model further, customizing thresholds for older and younger voters. “At this point in time, you want to be more inclusive than exclusive,” Mayur said. “I don’t want to be super-tight right now, the process is still brewing.”

But beyond these small points, the reasons for the divergence between IBD/TIPP’s poll and others is not entirely clear even with these additional details. Yet this is also not the first time the pollster has shown a closer contest than others.

About this time in the 2008 presidential contest, the IBD/TIPP tracking poll found Barack Obama leading John McCain by less than five percentage points when other surveys showed a high single-digit lead. IBD’s final tracking waves shifted in Obama’s direction, and its allocation of undecided voters netted Obama two percentage points in support. IBD said it tracked a sharp final-week shift to Obama to make it the most accurate pollster of the cycle. Pollster.com’s Mark Blumenthal (now of SurveyMonkey) was critical of that claim, noting that allocation of undecided voters requires some subjective judgment that the IBD poll’s shift converged nearly perfectly toward the polling average.

But Mayur doesn’t expect a big shift to Clinton to come in the final weeks, seeing the contest as closer than 2008 and 2012.

“I feel that 2008 was a watershed moment for U.S. politics, when Obama won by a seven percentage point margin and enthusiasm and excitement was very high. In 2012 Obama won with a margin of 3.6, exactly half of what he won in 2012. Considering the current conditions on the ground, even though there is this populist feeling on the Trump side, generally the excitement level is not comparable. I would say the 3.6 point margin that Obama won in 2012, if Clinton goes on to win that would be the ceiling for her. In reality I would expect somewhere between 0 and 3.6,” he said.

In two weeks, we’ll know where both the polls and the voters ended up.