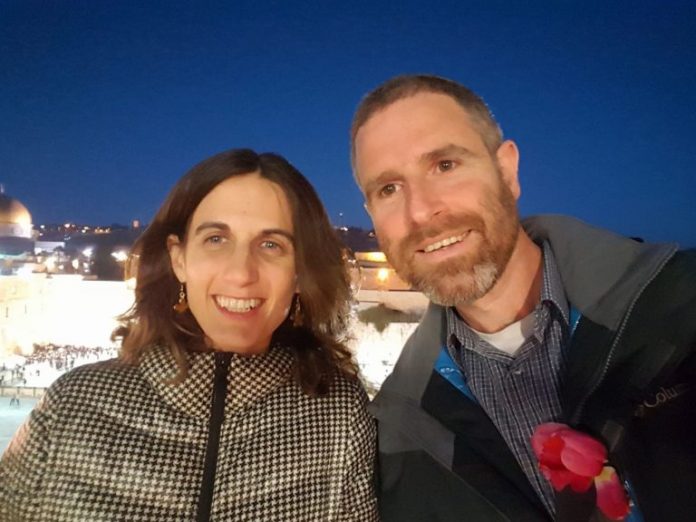 The Israeli widower who became a key symbol of the surge of Palestinian terrorism that began at the end of 2015 announced on social media that he is remarrying.

Natan Meir, husband of Dafna – a 38-year-old nurse and mother-of-six (two of whom are foster children) who was stabbed to death at the entrance to the family home in the West Bank settlement of Otniel just over a year ago – announced his engagement on Facebook this week.

His announcement – which came a mere month after his daughter, Renana, 18, who witnessed and tried to prevent a teenage terrorist from murdering her mother, got engaged — was accompanied by a photo with his kallah, Zohar Morgenstern, an educator from Yerushalayim. The couple is photographed with the Kosel and Har Habayis in the background.

In an interview with The Algemeiner last April – while he and Renana were on a sponsored tour of the US, which included presenting his case during an open meeting of the UN Security Council – Natan Meir said, “I have been walking around with a very broken heart. I don’t initiate political activities or speeches or anything. But I was raised and educated that when the state of Israel summons me, I come; I don’t ask too many questions.”

Natan added, “We’re not acting out of strength, but rather out of a lack of it; that is how we are living now. But, as someone told me one day, God is also the god of broken hearts. So that is the source of the strength.”

Dafna Meir was killed on January 17, 2016. Her Palestinian assailant entered her home, where her kids were present, and began to stab her repeatedly. While bleeding to death, she – and then-17-year-old Renana – tried to beat off the terrorist. By fighting to keep him from removing the knife at one point when it entered her body, she prevented him from murdering her children.