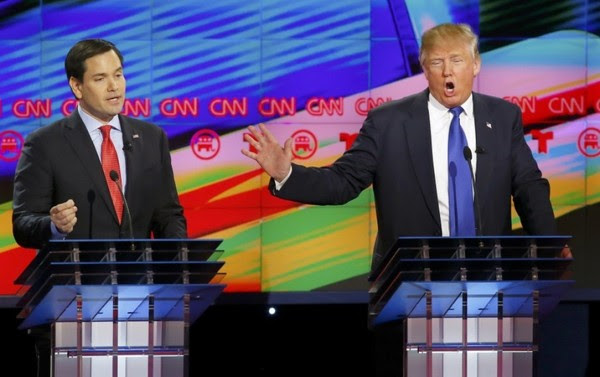 The 10th Republican presidential debate is in the books. I watched, tweeted and took some notes. My best and worst from the night that was is below.

– Marco Rubio: This was not only Rubio’s best debate performance. It was the best debate performance by any candidate in any debate so far in the 2016 election. Rubio, grasping the fact that if nothing changes in this race he — and everyone else — will lose to Donald Trump, hit Trump at every turn. He savaged Trump on using illegal immigrants to help build Trump Tower. He went after Trump for inheriting money. He hit Trump for his position on Israel and Palestine. And, most importantly, he rattled Trump during a back and forth over Obamacare. It reminded me of this moment from another great battle between two titans:

What Rubio’s stellar performance means is that the race between now and Tuesday — and March 15 and beyond — will be cast as a two-man showdown between Trump and Rubio. That’s the only chance Rubio has of winning. What I don’t know is whether the punches Rubio landed will do any lasting damage to Trump. Nothing else has — yet.

– Mitt Romney: The 2012 Republican presidential nominee has been a low-profile figure in this race. No longer! First came this tweet:

Sure, Romney came under a full-frontal assault from Trump during the debate. But, questions over when Trump and the other candidates will release their taxes took up a considerable amount of debate time. That demonstrates Romney is still able to drive conversation within the GOP.

– Crosstalk: There were times — lots of times — when two, three or even four candidates were trying to speak at the same time. This was crosstalk’s finest hour in its unending march to make America great again.

– Ted Cruz: Cruz watched — and I do mean watched — as Rubio turned the race into a two-man contest between he and Trump. Cruz was strangely absent from the main back-and-forths of the night. To the extent Cruz was able to get into a debate with Trump, he spent his time hitting the real estate mogul for making past donations to Democrats. Cast me as skeptical that that line of attack will work. Cruz also tried to make the electability case against Trump but found himself hoisted on his petard by The Donald, who noted that the Texas Senator’s polls aren’t in a great place. Cruz looked like the third wheel in this debate — a bad place to be with March 1 just five days away.

– Donald Trump: This wasn’t Trump’s worst debate. In fact, it might not even be in the bottom half of his performances. He generally counter-punched admirably — particularly against Cruz. But, Rubio got the better of Trump on several occasions; the Florida Senator found ways to embarrass and mock Trump, which is something no one in any previous debate has been able to do. Rubio also effectively exposed the thinness of Trump’s policy solutions especially on health care.

I am under no illusion — and no Republican operative or candidate should be either — that Rubio’s punches on Trump are guaranteed to slow the real estate billionaire’s momentum in advance of Tuesday’s primaries. But, Trump didn’t escape this debate unscathed and, if he can be cut, he was.

– Ben Carson/John Kasich: You could be forgiven for having forgotten that either the retired neurosurgeon or the Ohio governor were part of this debate. Carson and Kasich got almost no questions and the ones they did get they seemed unprepared to handle. Carson somehow made a fruit salad reference (see above) when asked about Supreme Court nominees. Kasich used every question to talk about how we all need to get along. Both men felt entirely ancillary to the proceedings — as though they were engaged in a different event than Trump, Rubio and Cruz were participating in. Which, of course, they sort of were.

– The Shrieker: Who was this person? And why did she shriek before the candidates even finished what they were saying? Was she pro-Rubio? Pro-Trump? I have no idea. One thing I do know: She was anti-my ears.