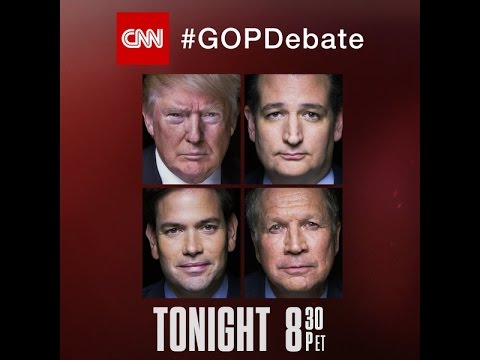 – Marco Rubio: The Florida Senator was poised, confident and knowledgeable. He avoided any sort of personal attacks on Donald Trump and largely steered clear of clashing with the race’s front-runner at all. It worked. (It also helped that Rubio had a hometown crowd ready to cheer his every word.) Watching Rubio on Thursday night, I found myself wondering where he might have been in this race if he hadn’t a) had brain-lock in the debate just before the New Hampshire primary and b) hadn’t spent 72 hours earlier this month getting in the gutter with Trump. Of course, that’s besides the point now. Rubio’s last hope in the race is to win Florida, denying Trump the state’s 99 delegates and praying that, somehow, the race changes drastically and puts him back in the mix. It’s a long shot. But Rubio deserves credit for performing extremely well when the chips were down.

– Donald Trump: Let me be honest here. I have no idea what to make of Trump when it comes to his debate performances. On the good side, Trump was far more measured and under control in this debate than in any of the previous ones. Gone were references to “Little Marco” and “Lyin’ Ted” and the general rhetorical nastiness that has been a Trump hallmark since he announced his candidacy. And, Trump was, largely, given a pass by the other men on the stage. Rubio, clearly scorched by his collapse in the wake of his juvenile attacks on Trump, wanted no piece of him. John Kasich, with a campaign built on hope and optimism, ignored Trump. Ted Cruz occasionally engaged Trump — trying to paint him as a policy simpleton — but the real estate mogul refused to take the bait. So, that was the good side. Scroll down for the bad side.

– Ted Cruz: The Texas Senator succeeded, at times during the debate, in making it seem as though it was a one-on-one race between he and Trump. Cruz was also less deeply rehearsed in this debate — to the good. He has a different challenge than Rubio or Kasich, who need to bend the arc of the contest. They need a knockout of Trump; Cruz is trying to beat him on points. And, on that front, this was a good debate for Cruz. He repeatedly hammered Trump’s policy solutions as nothing more than empty rhetoric. Also, Rubio’s good debate works in Cruz’s favor. Cruz can’t win Florida but needs to keep those 99 delegates away from Trump somehow.

– Kolinda Grabar-Kitarović: She’s the Croatian president. (But, of course, you knew that.) And thanks to Kasich joking that he’d be running for the president of Croatia if there wasn’t immigration to the U.S., I googled Ms. Grabar-Kitarović. I am certain I wasn’t the only one.

– Donald Trump: Imagine where Trump might be if he was willing to pick up a policy briefing book and, you know, skim it. He’s often able to coast by in these debates even with an almost total lack of policy knowledge. But, he got caught flat-footed a few times in this one. The most painful? Trump’s clear cluelessness about Cuba policy, made all the worse by Rubio’s deep knowledge, which he dropped on Trump’s head. The question, as always with Trump, is whether his lack of engagement on policy matters at all. It’s nothing new and he continues to win states and rack up delegates. Trump’s supporters seem uninterested in the minutiae of his policy positions. Rather they respond to his toughness and his tone. So …

– John Kasich: Kasich wasn’t bad. He just didn’t really stand out in any meaningful way. The Ohio governor kept up his Mr. Nice Guy routine but it played slightly less well in this debate because everyone was much nicer to each other. Kasich’s debate performance speaks to the larger conceit his campaign is built on; hang around, don’t make mistakes and offer yourself as an optimistic alternative. The only way a strategy like that works, of course, is if all of the people in front of you implode or kill each other off.

– Reince Priebus: This was the 12th Republican debate. It is March. Given the lateness of the hour — in terms of the primary — it is never a good sign when the chairman of the Republican National Committee has to go out before a debate and assure voters everything is going to be just fine, no need to worry, the situation is under control, please move along, nothing to see here.

“This party is going to support the nominee, whoever that is, 100%.” — RNC Chair Reince Priebus

– CNN: Look. I’m a man. I’m 40. I have two small children. I work a lot. Just tell me EXACTLY when the debate starts. Don’t promote — with your countdown clock no less! — that the debate begins at 8:30 pm eastern time only to tell viewers (OK, me) when they tune in that “right at the top of the 9 pm hour” things will get started. I, of course, get that CNN is making a ratings calculation here. They are betting that even if you are annoyed at their ruse — you know, their cunning attempt to trick you — you’ll be too lazy to change the channel because you know it’s only 30 more minutes until the debate starts. And, it works (on me). Still, CNN. Can’t we all just act like grown-ups?