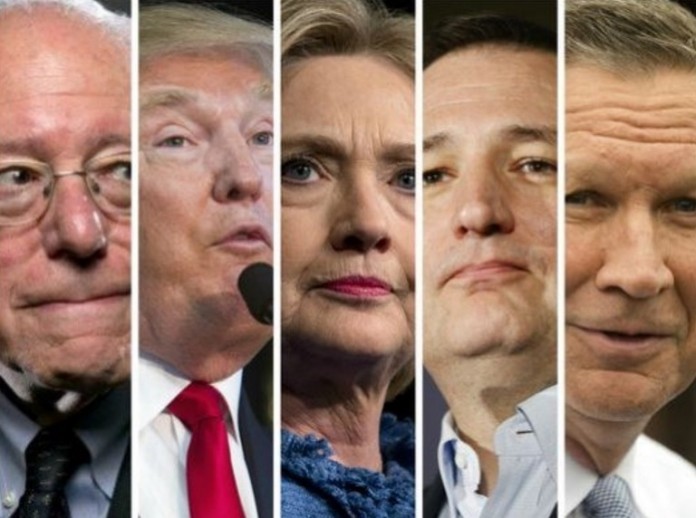 Voters in five states stretching from the mid-Atlantic to the Northeast went to the polls on Tuesday. At the presidential level, Donald Trump crushed his two remaining competitors while Hillary Clinton looked well positioned to extend her delegate lead over Bernie Sanders.

I picked some winners and some losers from the night that was. They’re below.

– Donald Trump: This was an an absolutely sweeping across-the-board victory for the real estate mogul. From a delegate perspective, this may wind up being Trump’s single best night of the primary process. His massive wins in Connecticut and Maryland help him run up the delegate score. His big margin in Pennsylvania should be a persuasive argument for the 54 unbound delegates the state sends to the Republican National Convention. And what’s clear is that Trump is getting stronger and stronger as the race moves to Indiana on May 3, a state that the anti-Trump forces now must win in order to blunt his momentum heading into the critical California primary on June 7. If Trump wins, the race will be all but over.

The simple fact is this: Trump just keeps winning and, increasingly, winning across all subgroups and demographics within the GOP. He still isn’t a numeric lock to get to the 1,237 delegates he needs. But man oh man is he sitting pretty right now.

– Hillary Clinton: Five more states came off the table Tuesday night — including big delegate prizes in Pennsylvania and Maryland — and Clinton remains in a commanding delegate position over Sanders. Clinton and her team are reluctant to call the race over for fear of angering Sanders supporters. And the race will keep going all the way through California in early June. But, for all intents and purposes, this one is over. To quote MSNBC’s Rachel Maddow: “She has effectively put this out of reach.”

In her victory speech, Clinton praised Sanders and his supporters and savaged Republicans as deeply out of touch with the needs of middle class Americans. Expect more and more of that in the coming days as Clinton continues her primary pivot and begins to focus full time on Trump.

– Chris Van Hollen: All the Maryland Congressman does is win tough Democratic primaries. He did it when he won his House seat in 2002 by defeating Mark Shriver, a member of the Kennedy clan, and he did it again on Tuesday when he beat back a challenge from fellow Rep. Donna Edwards. The race was deeply bifurcated along racial lines but Van Hollen won the white vote more convincingly than Edwards won the black vote. Given Maryland’s deeply Democratic nature, Van Hollen will roll in the fall general election and will likely never need to worry about re-election again. Look for him to quickly move up the ranks of Senate Democrats and eventually land in a leadership position; Van Hollen is a a rare pol who understands not only politics and policy but also how those two are deeply intertwined. He’s a rising star within the party.

– MSNBC cutaways to Bill Clinton during Hillary Clinton’s speech: Whoever was producing that speech deserves a raise. During almost every Hillary Clinton applause line, the camera cut to the former president in the crowd. Bill looked somewhere between proud and bemused throughout. It was awesome political theater — and the sort of stuff I absolutely love.

– Ted Cruz: I am somewhat baffled as to why the Texas Senator continues to get something of a pass from the party (and the media) for finishing not second behind Trump but third behind Trump and John Kasich in a bunch of these mid-Atlantic and Northeastern states. Remember that Cruz is de facto establishment candidate. And that Kasich has won a total of one state and has fewer delegates than Marco Rubio, who left the race in March. Soooo……If I might quote that great philosopher Ric Flair: If you want to be the man, you have to beat the man. I’d even be open to modifying that Flair-ism to: If you want to be the man, you have to come in second to the man.

My point is that if Cruz is the only true viable alternative to Trump — and he is — then why the heck is he not only getting blown out by The Donald but losing to Kasich? Momentum matters to Cruz. And, as of Wednesday morning, Cruz will be at a dead stop. Look for him to pull out all the stops he has to get re-started.

– Bernie Sanders: It’s not a question of if Sanders loses now, it’s a question of when he decides to leave the race — and what he wants as a parting gift. Presumably that will be some major influence over the party platform at the convention (unlikely) and/or a prominent speaking role at that convention (likely). The thing to watch now is whether Sanders tempers his rhetoric against Clinton, a tacit acknowledgement that the math is close to conclusive, or whether he keeps going at her hammer and tongs. His most ardent supporters — are there any other kind when it comes to Sanders? — won’t want him to pull any punches. How much does he listen to them? And how much should he?

– Mike Pence: The Indiana governor has avoided wading into the presidential race to date and signaled on Tuesday night that he has no immediate plans to make an endorsement. The reason is simple: Politics — both in the near term and long term for Pence. In the near-term, Pence is up for a second term this fall and doesn’t want to make any part of the GOP base in his state angry. In the long term, Pence would like to be a national candidate and, again, doesn’t want to piss off the Trump wing of the party. But, the “stop Trump” forces are going to push Pence like crazy over the next 48 hours for him to get behind Cruz; “Governor Pence, It’s Time to Take a Stand” reads a National Review op-ed posted Tuesday night. There’s more where that came from.

– Jeff Merkley: The Oregon Democrat is the only senator not named Bernie Sanders who has endorsed the Vermont socialist’s presidential campaign. That means that when cable TV is looking for a surrogate to represent Sanders, Merkley gets the call. That can be a good thing — raising Merkley’s profile! — but on Tuesday night it was a very bad thing. Moments after the terrific Steve Kornacki had run through the virtual impossibility of Sanders catching Clinton in pledged delegates, the MSNBC election night hosts threw it to Merkley to defend his candidate. After acknowledging that the math was getting more and more difficult for Sanders, Merkley tried to pivot to note that the national race is tightening. Which, of course, doesn’t matter at all in a state by state race for delegates. Oomph.

– Trump’s sound guy: Look, I am no advance guy or audio expert. But I do know this: When the candidate gets to the microphone and tries to start talking, you should turn off the music. And that you need to make sure the microphones work when Trump takes questions from reporters. Which puts me two steps ahead of Trump’s sound guy at Trump Tower on Tuesday night.