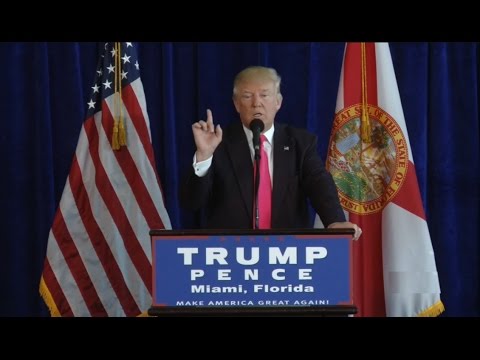 The big story at the Democratic convention for most of Wednesday was not the Democrats – not Hillary Clinton, Tim Kaine or even President Barack Obama, the evening’s star speaker. It was Donald Trump, whose loose and provocative talk about the Russians and Clinton’s emails seemed exponentially beyond even his standards for creating turmoil and controversy.

Trump thrives on chaos and above all else demands attention. When the spotlight falls elsewhere, such as on the Democrats this week in Philadelphia, he looks to shift it back in his direction. He is a candidate who uses disruption as a strategic force. Wednesday was a textbook example – whether for good or ill.

Trump veered into controversy at a Wednesday morning news conference in Florida. He suggested that the Russians should hack into Clinton’s private emails if they have not already and then release publicly those that she deleted before turning over the server to the federal government.

No one could remember a serious candidate for president seeming to urge a foreign power to carry out espionage on the United States and at the same time call on that country to intrude on a presidential election and possibly influence the outcome. It is another example of Trump doing and saying the unthinkable and daring the Democrats and his opponents to make it cost him politically.

The controversy came on a day that Democrats were planning to use their prime-time speeches to frame the contrast between the major-party nominees and attempt to paint Trump as wholly unsuited, temperamentally and by lack of knowledge, to serve as president and commander in chief.

The lineup of speakers included the president and Kaine, Clinton’s vice-presidential nominee; Vice President Joe Biden; former Defense secretary Leon Panetta and other former officials with national security credentials. The Democrats were already loaded with evidence to present to the American people of all the ways in which Trump has proven that he should be kept as far from the Oval Office as possible.

Trump’s remarks seemed to play directly into the Democrats’ hands by committing a political gaffe that they could seize on to portray him as reckless, unknowing and naive. But that is partly because the Democrats were thinking by the conventional standards of political logic, which has never been Trump’s way. Trump has defied conventions ever since he announced his candidacy and does not think that has cost him.

Trump’s latest comments feed concerns that the Republican nominee is sympathetic toward Russian President Vladimir Putin and would be soft on Putin and Russian aggression if he were to become president. He has repeatedly declined to denounce the Russian leader, and his earlier comments undermining America’s commitments to the North Atlantic Treaty Organization – most recently whether a Russian attack on one of the Baltic nations would demand a U.S. response – have alarmed those in the foreign policy establishment.

But the foreign policy establishment is not Trump’s audience. Nor is any establishment – political, economic, academic. He thumbs his nose at these elites, as do many of his most passionate followers. The Trump loyalists have proven themselves to be resistant to appeals from so-called experts or establishment politicians.

Like the majority of British voters who last month turned their backs on warnings that a vote to leave the European Union would imperil the economy and the country’s standing in the world, Trump’s supporters show little deference to views of the establishment.

The experts can express their outrage time and again at what Trump says and does about serious issues. For Trump’s supporters, it is his very recklessness and disregard for the conventions of politics that have proven so appealing. What’s to lose if you are already left out?

Throughout the day, Democrats rushed to denounce Trump, who also said Wednesday that he would be “looking” at the question of whether Crimea, which was seized by the Russians two years ago, should be considered Russian territory.

The Democrats suggested that no matter what Trump was calling for, it was wrong. If he was calling for the Russians to hack into government information, it was borderline treasonous. If he was calling on them to violate someone’s privacy, they said, that would be illegal. Others simply said Trump had revealed his ignorance and his lack of fitness.

No one needed to issue talking points to Democratic surrogates; the counterattack was obvious. The Clinton campaign offered guidance based on a statement from foreign policy adviser Jake Sullivan. He pointed out that the real issue was not what Trump said but that Russian hacking of Democratic National Committee emails – which intelligence officials believe was the case – is a national security issue and ought to be treated as such, not as mere political jousting.

Trump’s defenders sought to blame the Democrats and the media for overblowing what the candidate meant by his remarks. “The media seems more upset by Trump’s joke about Russian hacking than by the fact that Hillary’s personal server was vulnerable to Russia,” former House speaker Newt Gingrich tweeted at midday.

Former New York mayor Rudolph Giuliani suggested that what Trump was recommending was that if the Russians have the emails, they should turn them over to the FBI. That begs the question of why, as he called on the Russians to release them, Trump said, “I think you will probably be rewarded mightily by the press.”

A spokesman for House Speaker Paul Ryan, R-Wisconsin, called Russia “a global menace” and Putin a “thug.” He said the Russian leader “should stay out of this election.” Many other Republicans, however, were slower to react, caught between their endorsements of Trump and the discomfort they must have felt by his latest outburst.

Trump’s comments provided more evidence that the candidates speak to two Americas. Trump’s America despises Clinton and sees her use of a private email server to conduct business as secretary of state as a criminal offense that should disqualify her from high office, and the failure to prosecute her as evidence of a rigged system. Clinton’s America sees Trump as a threat to the future of the republic and a man unsuited to occupy the presidency.

Those are the givens of the campaign ahead: unbridgeable constituencies with unbending and negative views of the opposition. But it is Trump who continues to play havoc with the system and in so doing to set a standard of conduct that has taken this campaign into unsettling places.