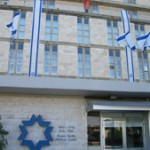 Physicians at Shaare Tzedek Hospital in Yerushalayim hospitalized a Nigerian woman in isolation Friday afternoon in fear that she may represent the first case of Ebola to reach Israel, Ynet reports.

The patient works in Nigeria’s health services in Nigeria, located in western Africa where an Ebola outbreak has killed nearly 2,000 people, and admitted herself to the hospital with a high fever.

It was decided to isolate the woman and fear of her suffering from Ebola arose from the consideration that she has constant contact with sick patients in Nigeria, where several cases of the deadly disease have been confirmed.

“It is possible that she is suffering from another viral complaint, but we are taking every precaution while we determine whether this could be Ebola,” the spokeswoman said, adding that test results were expected by Saturday.

The woman arrived in Israel as a tourist on Wednesday.

Since the break-out of Ebola in western Africa, the Health Ministry has taken several steps in preparation for the possibility of the disease arriving in the Middle East and Israel. Read more at Ynet.