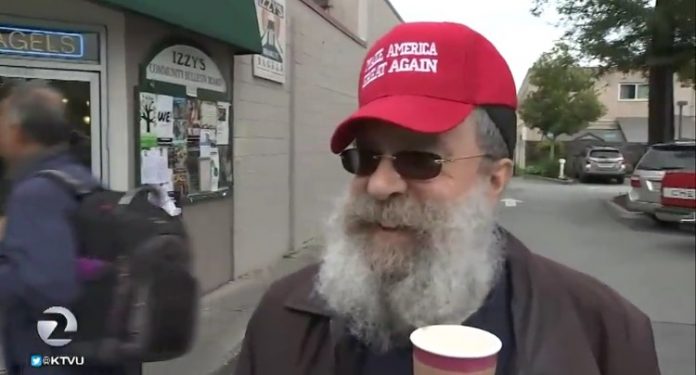 An accountant has lost her job after berating a 74-year-old Orthodox Jewish man in public and online for wearing a “Make America Great Again” cap at a Starbucks in Palo Alto.

Palo Alto resident Rebecca Parker Mankey, spotted the Victor F. in Starbucks and immediately began screaming at him, calling him a “hater of brown people” and “Nazi scum” and tried to recruit other Starbucks customers and employees to berate him as well. No one joined her but no one defended him from Mankey’s vitriol either.

Mankey went home and posted pictures of the man on social media, asking her Facebook and Twitter followers to help find him. “I am going to publicly shame him in town and try to get him fired and kicked out of every club he is in,” she wrote on Twitter. “I am going to go to his house, march up and down carrying a sign that says he hates black people. I am going to organize protests where he works to make him feel as unsafe as he made every brown person he met today.”

“You know, America is still a free country right?” said Victor F., a  supporter of the president who lives in Palo Alto. He also says that as Jew, being called a Nazi was particularly hurtful.

Mankey’s, who was an accountant for Gryphon Stringed Instruments, was fired after her boss read her deranged post. “We feel that music is what brings people together. So having someone then making comments that are so divisive is not consistent with our values,” said store owner Richard Johnston.

Since losing her job, the woman has seemed to have gone into hiding, while the Victor was spotted wearing the hat Wednesday.