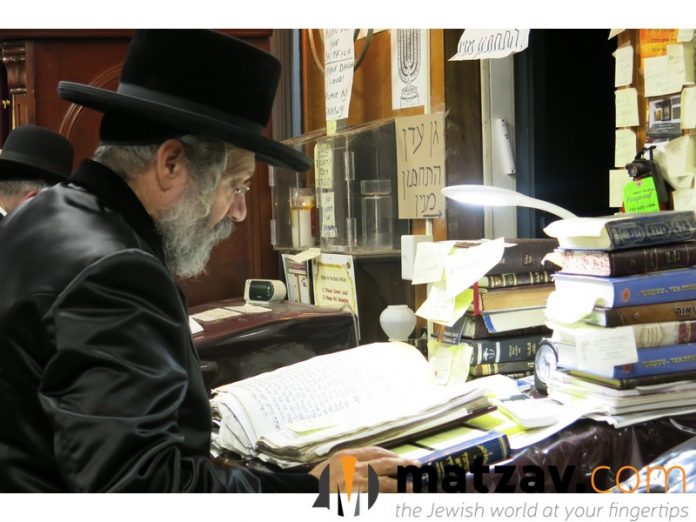 >>Follow Matzav On Whatsapp!<<
When Rabbi Mordechai Jungreis, Niklesburger Rebbe, packed his belongings onto a truck last Thursday Parshas Korach (June 22) afternoon and headed upstate, friends figured he was going to spend a few quiet days of vacation in the mountains. After all, it was still a bit early for the arrival of the summer vacationers that flock to Congregation Bnai Israel, the historic shul he oversees at 457 Route 52 in Woodbourne, New York.
They were wrong.
When he arrived in Woodbourne Rabbi Jungreis decided to stop at the shul before dropping off his personal possessions at his bungalow. He wasn’t going there to check up on a long-lost friend; Rabbi Jungreis made the trip to the mountains many times over the winter months to ensure the building is properly kept up. He also celebrated the closing on the building just days earlier, a major step in simplifying operations after years of annual negotiations with the local board of directors before each season over the terms for use of the building during the summer months.
A few bystanders smirked when the energetic rabbi unlocked the doors and immediately hung up a sign on the outside reading simply: “Mincha Now.” After all, who is up in the mountains so early? As always, Rabbi Jungreis was unfazed. “Wait and see,” was his reply.
In spite of his nonchalant attitude, even Rabbi Jungreis was unprepared for what followed. Seemingly in a matter of minutes the shul was packed with throngs of worshippers. He had not advertised his arrival or the date when the shul would reopen for its eighth season of serving Sullivan County with minyanim virtually round-the-clock. Yet in no time dozens of people were there—and the minyanim continued throughout the afternoon and evening. Prayers wound down that first night at 2 AM.
So Rabbi Jungreis did not enjoy a few days’ vacation before beginning his exhaustive summer schedule overseeing operations at the Woodbourne Shul. The bemused rabbi is quick to point out that for him, “this is my vacation.” In reality the move from his beis medrash – the “Jungreis Chesed Center” – in the heart of Boro Park to the Woodbourne Shul is just an act of relocating his efforts for his fellow Yidden in accordance with the seasonal demographic shift. The rabbi never truly takes a break from his constant chesed and outreach wherever he goes.
In fact, his entire summer is devoted to reaching out to the tens of thousands who visit the shul each year. There are tables of refreshments, daily and weekly shiurim and the famous, steaming Thursday night chulent for travelers to recharge themselves. Rabbi Jungreis even offers plates of food for people to take with them. And then there are the long ques to greet the rabbi and receive his warm brachos.
As always, the feedback has been swift and overwhelming in its praise. One woman admitted that “my husband can’t wait to go to the country so he can visit the Woodbourne shul.” An email arrived from a man in Bloomingburg asking, “When does the shul open? I’ve been waiting for it all year.”
Services are in full swing, and that doesn’t just mean the minyanim. This year Keser donated a gartel roll, which hangs near the inside with a pair of scissors. Anyone in need can cut themselves a length and proceed to daven. Full refreshments are provided, and of course the restrooms are functioning. The Kolel Mesirus Nefesh that ensures the presence of a kol Torah is also set to begin.
On that opening Thursday one man who arrived for mincha found the atmosphere so inviting he sat down and stayed right until the shul closed at 2 AM. He introduced himself as a baal tshuva to Rabbi Jungreis’ son Rabbi Yitzchak and asked him how the Rebbe knew that the warm embrace was just what he needed. Of course no answer is necessary, but Reb Yitzchak was quick to clarify on behalf of his father, “For your smile alone it was worth opening up the shul!”
The bustling shul represents a tremendous change for a section of the Catskills that used to be known as a severe trouble spot. Rabbi Jungreis has a big hand in that transformation. Rabbi Ahron Shechter, Rosh Yeshivas Chaim Berlin, noted 20 years ago that the status of “Woodbourne” is inherent in its name: a fire burning out of control. But Rabbi Jungreis, with his innate understanding for youths of all walks and stations, would walk right into the local pool hall and greet the Jewish children there. He sang and danced with the boys and made everyone feel respected and cherished.
Today, Rabbi Shechter says, Woodbourne is still on fire—only this time it is a fire of holiness that warms everyone in its reach.
Despite the steep price of generosity, Rabbi Jungreis never solicits to fund the cost of operating the shul. (Last year the chulent alone cost $13,000; janitorial services cost even more—to name just two expenses.) Please demonstrate your hakaras hatov by supporting this incredible chesed project. You can memorialize a loved one or earn a zchus for any occasion. For more information contact Rabbi Jungreis in the shul or at 646-256-4049.