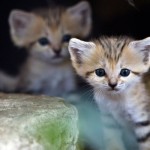 A study published today in the journal Science has dramatic news: species of plants and animals are going extinct about 10 times faster than biologists had previously believed, meaning they are disappearing from Earth at least 1,000 times faster than they did before humans existed.

“We are on the verge of [a]…great extinction,” said study lead author Stuart Primm. “Whether we avoid it or not will depend on our actions.”

Many issues are combining to crowd species out of their habitats but the top reason is habitat loss, as humans continue to build over and alter the environment.

As space tightens, invasive species often take over-a process only helped along by two new shipping routes in the Arctic. Commercial ships often accidentally carry invasive species and carrying them from one ocean into the other “is a game changer that will play out on a global scale,” according to Whitman Miller, a biologist from the Smithsonian Environmental Research Center. Read more.