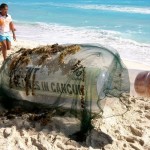 A message in a bottle, believed to be more than 108 years old, washed up on a beach in Germany. The bottle was allegedly released into the North Sea around 1904 with a note requesting that whoever finds it have the bottle sent to the Marine Biological Association of the UK.

The Association is still waiting to make a final determination if this is the oldest message in a bottle.

The previous record was held by one discovered in 2013 to be 99 years old. Read more at NDTV.