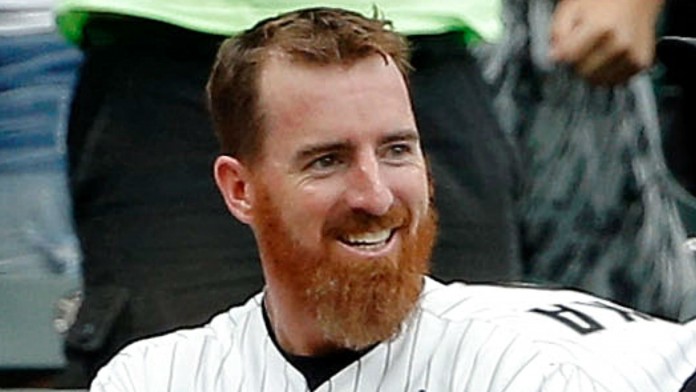 Adam LaRoche had considered the idea of retiring for his children before this week, when he actually did it, when he walked away from $13 million because the Chicago White Sox placed restrictions on how often his son, Drake, could come to their clubhouse.

When LaRoche re-signed with the Washington Nationals in 2013, when he was 32 and still at the end of his prime, Drake and LaRoche’s daughter, Montana, asked him to stay home. “They’ve been wanting me to retire for two years,” LaRoche said before a game late in the 2014 season, sitting in the home dugout at Nationals Park.

Even then, LaRoche didn’t take it as an empty request. He loved the game but always had a different perspective on it than others in the big leagues. He played baseball but didn’t define himself year-round as a baseball player. He owns an enormous ranch and E3 Meat Co. with his brother in Fort Scott, Kansas. He is a world-class hunter. He’s pals with country music stars and NASCAR drivers. He exists in a kind of Southern-fried fantasy life, and baseball was an important part. But it was always just a part.

“I do not want to ride this game out and try and suck every dollar I can out of the game,” LaRoche said back in 2014. “That’s not me. I love the game but not to the point where I’m going to just leave with nothing left in the tank. On the other hand, I got this fear of leaving too early and looking back two or three years down the road and really regretting not playing when I felt good physically and mentally to do it.”

LaRoche did not fulfill his kids’ request to retire early in large part because he could at least make Drake part of his profession. For LaRoche, bringing his son to the ballpark was a family tradition. He and his brother Andy, a less accomplished major leaguer than Adam, grew up in baseball clubhouses with their father Dave LaRoche, a left-handed major league pitcher for 14 seasons and a coach for many more. Those experiences, still some of LaRoche’s most cherished, shaped LaRoche.

Drake was born when LaRoche was 22, still an Atlanta Braves prospect. He determined he would make Drake part of his career. Drake was 8 when LaRoche first signed with the Nationals, and as LaRoche grew comfortable and Drake crept into preadolescence, Drake become a regular presence.

One game, LaRoche blasted a home run, and Drake sprinted down the tunnel from the clubhouse and hugged his father. Another game, Drake was in the Nationals bullpen when LaRoche swatted a homer into it. After the Nationals clinched a pennant, Drake sipped sparkling cider with 19-year-old Bryce Harper. It was hard to tell if father or son relished the memories more.

“It makes all of us who don’t have kids that age yet kind of jealous,” the Nationals’ Ryan Zimmerman once said. “That’s kind of the ultimate dream: to have your son in the clubhouse with you, let him interact.”

When LaRoche walked away, many assumed teammates had a problem with Drake in the clubhouse. Several White Sox told reporters they enjoyed his presence, and team president Kenny Williams admitted many players expressed disappointment he’d told LaRoche to keep Drake home more often. It would be stunning if there were a significant number of silent dissenters. Nationals players adored Drake. He provided levity in a grinding season and failure-based game. He scrubbed cleats and collected baseballs. He stretched with the team and shagged batting practice. They viewed him, the joke went, as their 26th man.

One reason teammates didn’t mind having Drake around is because it was Adam LaRoche’s kid. There is probably not a more admired, more well-liked man among ballplayers than LaRoche. He knew everybody – there was hardly an acquisition who didn’t mention that he had called LaRoche upon learning he had joined the Nationals. He led Bible studies and took teammates on exquisite hunting trips. He could raise a little ruckus and give the best advice on how to blend family and baseball. Given the general demographic of ballplayers, LaRoche was viewed inside clubhouses as both the coolest and the sagest guy around. His kid helped out around the clubhouse and made them laugh. The other players loved Drake.

Like few players, LaRoche understood baseball, even at the highest level, as a family endeavor. He never sensed any apprehension from the people who mattered most to him professionally – his teammates – about Drake hanging around. He had a rich life outside of baseball, no matter how much he loved the sport. And so when Williams asked him to dial back Drake’s presence, LaRoche viewed it not as an order, but a choice. And his choice, considering his history, is not all that surprising.