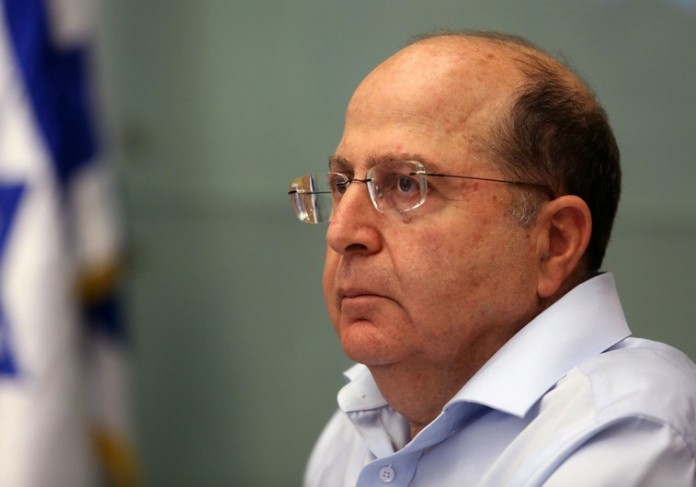 As reported on Matzav.com last week, Israeli Defense Minister Moshe Ya’alon stunned the political arena Friday by announcing his resignation on social media. In a statement he made later, Ya’alon stressed he was not exiting politics entirely and that he plans to vie for leadership roles in the future.

“I have informed the prime minister that following his conduct during recent developments I have lost faith in him. I will resign from the Knesset and take a timeout from politics,” Ya’alon posted on Twitter and Facebook.

According to the Knesset’s bylaws, Ya’alon’s resignation takes effect within 48 hours. Prime Minister Benjamin Netanyahu will act as defense minister pending the nomination of Ya’alon’s replacement, who most likely will be Yisrael Beiteinu party leader Avigdor Lieberman. Temple Mount rights activist Yehuda Glick, no. 33 on the Likud party’s Knesset list, is slated to replace Ya’alon in the Israeli legislature.

Netanyahu reportedly spoke with Ya’alon on Thursday and told him no final decision had been made about replacing him as defense minister. A senior Likud official said Netanyahu intended to appoint Ya’alon as foreign minister, but would not announce that publicly until his negotiations to bring Lieberman’s party into his governing coalition were concluded. Ya’alon’s associates, however, said he was not offered the foreign minister portfolio.

In a press conference held Friday, Ya’alon further explained his decision to leave, saying, “I have no intention of quitting political or public life. I will return and I plan to vie for a position of leadership in the future….I have seen every one of my roles as a calling and I have never been willing to sacrifice Israel’s security for political gain. I have worked harmoniously with the prime minister for a long time, especially during Operation Protective Edge, but unfortunately I found myself having serious disagreements with the prime minister and several ministers and MKs, on fundamental issues.”

“I fought with all my might against the phenomena of extremism, violence, and racism that threaten Israeli society’s resilience, and have permeated even the military, to the point of undermining it,” he continued. “Overall, Israeli society is a healthy one, and the sane majority strives to maintain a Jewish, democratic, liberal state, accepting of everyone regardless of religion, race, gender, ethnicity, or sexual orientation. But unfortunately, both Israel and Likud have been taken over by dangerous extremists, undercutting our home and threatening those in it. This is not the Likud party I joined, and the vast majority of Likud voters—the sane and responsible public—would be wise to understand the depths of the crisis and the violent spirit that has overtaken the movement.”