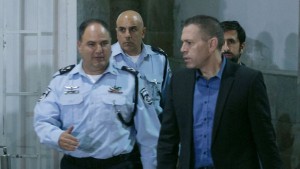 Yishai Shlissel, who was released from prison mere weeks before the parade after serving a 10 year term for a similar attack, stabbed six people at the parade, killing 16-year-old Shira Banki and leaving five others wounded.

Acting Police Commissioner, Maj.-Gen. Benzi Sau, decided to adopt the conclusions of an internal inquiry commission. The commission’s conclusions were submitted to Public Security Minister Gilad Erdan last week, and were cleared for publication on Sunday.

The commander of the Police’s Jerusalem District, Maj.-Gen. Moshe Edri, was reprimanded, as the commission holds him responsible for the goings on in the district. The commission noted that under Edri’s command, there wasn’t a clear division of responsibilities among the different sub-districts.

The commander of the Zion sub-district, Brig.-Gen. Efraim Habibian, was also reprimanded, due to the failings found in the operations of policemen in his sub-district, mostly with regards to intelligence activity.

The most senior officer to be reassigned is the commander of the Moriah sub-district, Brig.-Gen. Kobi Davidian. He is barred from promotion in the next five years, and will not serve in command positions in the future. It was in his area that the attack occurred, and the commission holds him responsible for the failings of the officers under his command.

The head of the operational branch of the police’s Central Unit, Chief Supt. Shai Hilleli, was reassigned and is barred from operational positions in the next five years. Hilleli’s forces were responsible for identifying “suspicious individuals” at the parade and in nearby streets.

The head of the Moriah sub-district’s intelligence and detection office, Supt. Tzachi Halfon, was reassigned after he failed in fulfilling his responsibilities and some of the district commander’s orders.

The Moriah sub-district’s operations officer, Chief Supt. Shlomo Bachar, was reprimanded after failing in fulfilling his responsibility to adequately brief mission commanders at the parade.

Furthermore, the commander of Section B of the parade route, Chief Inspector Oleg Golend, was reassigned and is barred from command positions for five years.

The head of the reporting and coordination center, Supt. Doron Shalom, was reassigned and will not attend commanders’ course.

A Border Policeman stationed at the roadblock on Washington Street was also reassigned and barred from command positions in the future.

The inquiry commission noted in its report that the police failed to properly handle intelligence alerts and threats Shlissel made to repeat his crime, which resulted in its failure to prevent him from entering the parade’s area and getting to the marchers.

The commission, headed by Maj.-Gen. (ret.) Yisrael Yitzhak, submitted its initial conclusions in mid-August, but Erdan asked the commission to examine its conclusions more thoroughly.

The inquiry commission, formed by Acting Police Commissioner Sau, soon after the murder to examine how Shlissel was able to commit the same crime he committed a decade prior.

Among other things, the commission examined why Shlissel was not under police surveillance, despite the fact he announced his intentions to harm the marchers at the pride parade. The commission also examined why orders from police officers, who alerted that Shlissel had been released from prison and might harm the marchers, were not conveyed to the policemen on the ground, or were not followed.