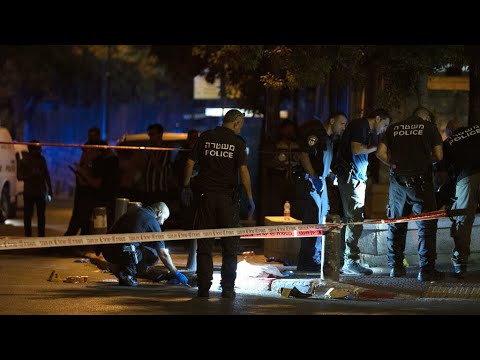 At Shaare Zedek Hospital, two people are still hospitalized from the shooting attack in the area of Kever Dovid Hamelech in the Old City of Yerushalayim. One of them is Liba Ahuva Schreiber, 37, a mother of eight children, who was hit by the terrorist’s bullet in the stomach while just a few weeks before the birth of her eighth child.

When she and her 39-year-old husband Chaim entered their car, parked in the Old City, the terrorist, Amir Sidavi, 26, a resident of East Jerusalem, emerged and opened fire at a bus that stopped near them. After hitting and injuring several passengers, he approached the Schreiber couple’s car and shot at Liba Ahuva, injuring her very seriously.

Chaim, who escaped the terrorist’s gunshots and was not injured, recounted the moments of horror in a conversation with reporter Gilad Cohen this evening, informing the public that his wife has boruch Hashem regained consciousness and communicated with him after undergoing a series of complicated surgeries, including a caesarean section during which their premature son was born.

“My wife woke up and is starting to recover after a very difficult operation,” he said. “She will have to undergo another operation later. She says she feels the pins in her body.”

About the moments of horror Chaim recalled: “We heard six shots. The whole event lasted a total of 40 seconds. …He finished shooting and then came to our car, made an angry face at us, a face of murder, grabbed the weapon with both hands and looked like a skilled sniper.”

In that chilling moment, Chaim recalls: “This man looked at us very hard with his eyes, and it seemed that he was debating who to shoot – and he chose the stomach of Liba Ahuva. He shot and the windshield broke, but did not shatter completely. It may be that this is what saved us. If it was possible to see through the window, maybe he would have shot again.”

Chaim said that the bullet penetrated the car and hit his wife, as mentioned, and the shooter immediately fled the scene without saying a word. Chaim shared: “I didn’t understand what happened. I didn’t feel anything and I thought my wife didn’t either, but then she shouted that she felt blood. The bullet entered and then left her body. Miraculously, because she was pregnant, her organs were a little higher – and that saved her life.”

Chaim says, “I haven’t slept and I haven’t eaten since the attack. My life is madness.”

As for his premature baby, he said, “Our child is fighting for his life. He needs a yeshuah and for the people of Klal Yisroel to daven for him..

All are asked to daven for Liba Ahuva bas Rivka Breindel and her son.