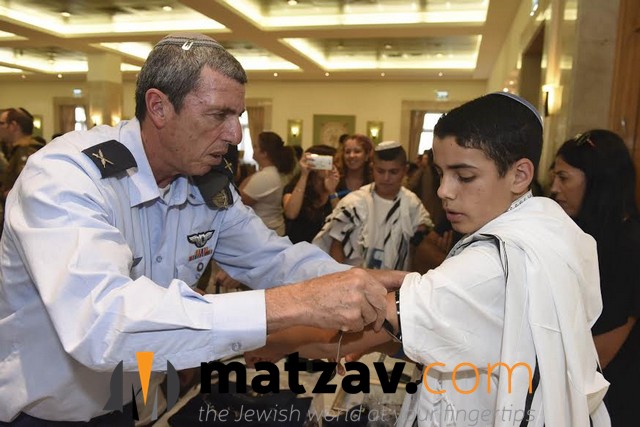 Hundreds converged on Yerushalayim on Monday to celebrate the bar/bas mitzvahs of 45 orphans who lost parents in the IDF.

The annual IDF Widows and Orphans Organization (IDFWO) Bar Mitzvah celebration was forced to hold their event behind closed doors far away from the Kosel, where it is usually held.

In addition, boys and girls from the Druze and Bedouin community received gifts and celebrated their coming of age together with the other IDF orphans.

Army chaplains were on hand to teach the children how to put-on their new Tefillin and be called up to the Torah.

The ceremony was followed by a huge party held at the Yerushalayim Theater attended by President Reuven Rivlin, Defense Minister Moshe Yaalom and IDF Chief of Staff Gadi Eiskenot and the heads of the Israeli police and prison service. Despite the ongoing wave of terrorism across the country, the dignitaries all came, spoke and celebrated together with the new adults as one extended family.

Nava Shoham-Solan told the crowd how proud she was as “one who lost her own husband and raised two-young children alone, to see the IDF orphans grow stronger by the day and grow into upstanding citizens of the State of Israel.”

Adding to the special family spirit President Reuven Rivlin told the children: “I consider each and everyone of you as my own grandchild and I wish you only the best in life. You have been through so much at such a young age, but you have prevailed and I am personally very proud of you all.”

Speaking about the decision to move the main event from the Kosel,  Yuval Lipkin, CEO of IDFWO said: “Despite the ongoing wave of terror, we did everything in our power to ensure that the event was held in Jerusalem, while taking the highest precautions to ensure the safety of those celebrating.”