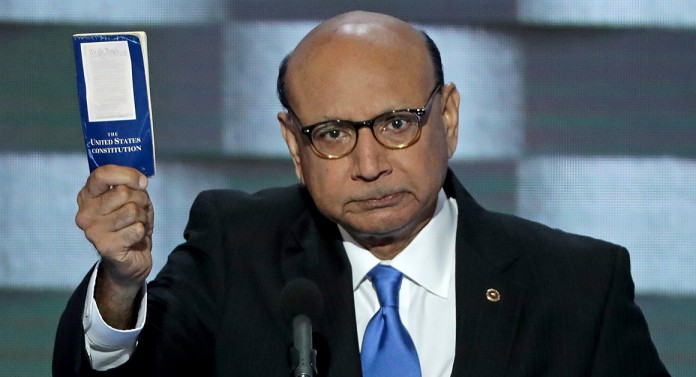 In the week since Khizr Khan, the father of an Army captain killed in Iraq in 2004, made an impassioned call to elect Hillary Clinton, some of her supporters have found another person they’d like to see in public office: Khan.

The Charlottesville, Virginia, lawyer and his wife, Ghazala, rose to national prominence after he challenged Trump’s rhetoric on Muslim Americans in a speech at the Democratic National Convention in Philadelphia.

Thomas Keefe, a Vietnam veteran and longtime Democratic activist, watched the Khans from backstage at the convention and thought of his son’s friend who died while serving in Afghanistan five years ago this month. Northern Virginia native Douglas J. Green was 23.

“There were a lot of things that were swirling around my head when Mr. Khan was speaking,” he said in a phone interview, his voice cracking.

By the time Keefe, 67, had returned home to Knoxville, Tennessee, he had resolved to send a message to Republican presidential candidate Donald Trump about the kind of leadership he believes Americans deserve.

So he started a digital crowdfunding campaign intended to recruit Khan to run for the Virginia House of Delegates, complete with a bumper-sticker-ready slogan: “Yes We Khan!”

As of Thursday afternoon, a typical pledge to Khan was $111, more than the site-wide average of $70, according to the company. Promises to give have come from people who identify as Republicans as well as Democrats.

None of this appears to have motivated Khan to take concrete steps toward seeking office. In an email late Wednesday, he declined comment, saying only, “We are grateful for the pouring of love, support and respect.”

If Khan did decide to run in the 58th District – the district mentioned in the Crowdpac solicitation – political experts say it would be an uphill climb, even for someone with newly earned national name recognition. The 58th includes solidly Republican households north, south and east of the liberal bastion of Charlottesville,

The current officeholder, Del. Robert Bell, R-Albemarle, is running for the GOP nomination for attorney general.

If he wins, he would face incumbent Mark Herring (D), whose campaign has a connection to the Crowdpac effort. Keefe’s son is the deputy director of Herring’s PAC, One Commonwealth.

The PAC’s director, Hannah Schwartz, said it is not involved in the effort to entice Khan to run.

Crowdpac’s advisers include Republicans and Democrats, and staffers are just as likely to have worked in politics as in Palo Alto. The CEO is Steve Hilton, a former aide to former British Prime Minister David Cameron.

Liz Jaff, Crowdpac’s head of business development, said the site was conceived to dilute the influence of super PAC money in favor of small donations from lots of people. The San Francisco start-up does not recruit candidates. “The entire reason we exist is to be able to nominate people,” said Jaff, who worked on both of President Barack Obama’s presidential campaigns.

Asked if the Democratic presidential nominee was involved in the effort to recruit Khan, Sarah Peck, spokeswoman for the Clinton campaign in Virginia, reissued a general statement of support that Clinton made last week.

“This is a time for all Americans to stand with the Khans, and with all the families whose children have died in service to our country,” it read, in part.

Khan created one of the most memorable moments of the convention when he panned Trump’s vow to ban Muslims from entering the United States – a stance Trump has since softened.

“Let me ask you, have you even read the United States Constitution? I will gladly lend you my copy,” Khan said, pulling a pocket-size version of the document out of his suit jacket. He added, “You have sacrificed no one and nothing.”

The real estate mogul fired back. Trump accused Khan of being controlled by the Clinton campaign and questioned why Khan’s wife, Ghazala, did not speak on stage. She sat for an interview with MSNBC the following day and wrote a column for The Washington Post.

Trump’s remarks sparked outrage from observers in both parties. A former top aide to New Jersey Gov. Chris Christie (R) on Tuesday denounced Trump’s treatment of the Khans and said she would vote for Clinton.

Joining the fray with a rare political statement was Virginia first lady Dorothy McAuliffe, who, along with her husband, Gov. Terry McAuliffe (D), has been close to the Clintons for decades. One of their sons is a Marine and Naval Academy graduate.

“As an advocate for military service members and their families, I am deeply disturbed by Donald Trump’s disgraceful attacks on the Khan family, and I believe that he owes them an apology,” Dorothy McAuliffe said in a statement released by the Clinton campaign.