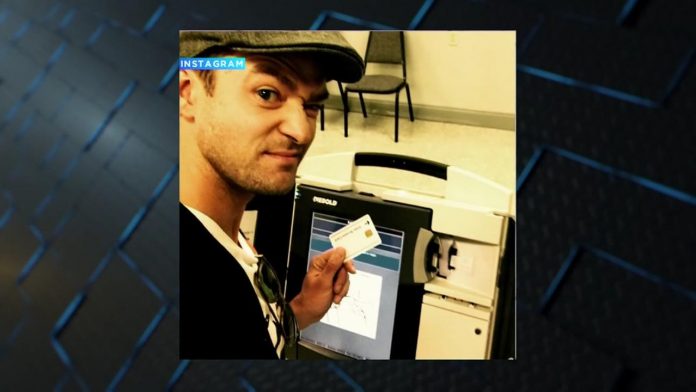 One voter flew from Los Angeles to Memphis, his home town, this week so he could vote early in the 2016 elections. We know this because he decided to encourage his Instagram followers to also go out and vote by posting a selfie from the voting booth, his electronic ballot visible in the background.

“There could be early voting in your town too. If not, November 8th!” the voter wrote. “Choose to have a voice! If you don’t, then we can’t HEAR YOU! Get out and VOTE!”

Great idea for a “go vote” message from someone with millions of Instagram followers, right? Not quite, because in Tennessee, it’s illegal to take photos or videos in a polling place.

The voter has since deleted the incriminating selfie after a day of confusion over whether the star would face any legal consequences for posting it (the answer is, he won’t, in case you were wondering).

But the confusion sums up the state of the laws across the country that govern voter selfies, as a recent review from the Associated Press of each state’s policy makes clear. It’s illegal in 18 states to take them, AP found. But ballot selfies are legal in 19 other states, plus the District of Columbia, even if many of those states appear to frown upon the practice.

For the rest of the country, though, the answer to the question “Can I take a selfie with my ballot?” is basically some degree of “Who knows?”

In Texas, the law prohibits photographs within 100 feet of a polling station, but it says nothing about snapping and posting a picture of a mail-in ballot. Oklahoma officials told the Associated Press that the law appears to ban it, but the penalties for violating the law by posting a ballot selfie aren’t clear. In Missouri, voters are banned from showing their ballots to anyone else if the “intent is to show how they voted,” the AP writes. The Missouri Secretary of State’s office told AP that ballot selfies were a “gray area” under that prohibition.

And those are the easier ones to explain. California recently passed a bill repealing its ban on voters showing others their filled-in ballots, but it won’t go into effect until after Election Day. However, the AP wrote, it doesn’t appear that California was enforcing its soon-to-be-ex-law anyway, so it’s kind of OK there but not yet, at least officially? And Delaware’s answer was that cellphones are banned from voting booths, but officials don’t think they can “control what happens behind the curtain.”

Even in Connecticut, a state that the AP listed as a place where voter selfies are “legal” based on a statement to them from the Connecticut secretary of state’s office, officials have the power to ban behavior that “threatens the orderly process of voting or the privacy of another voter’s ballot” at their discretion, which could presumably include ballot selfies.

Other states have gone to court to determine whether it’s OK to ballot-selfie. A federal judge banned Indiana from enforcing its law again ballot selfies last year. The First Circuit Court of Appeals struck down New Hampshire’s 2014 ban in September. And on Monday, a federal judge said that Michigan couldn’t enforce its ban on ballot photographs (the state intends to appeal, however, and has asked for an injunction to stop the judge’s decision from going into effect until after Election Day).

A lot has changed since 2014, when we first looked at the legality of ballot selfies. For one thing, several states appear to have clarified their policy on the practice, either through the legislative process or through statements to, for instance, the AP for their recent review. But the tension that makes this such a weird issue to resolve is still more or less the same:

“It’s a very unusual case,” says Jeffrey Hermes, the deputy director of the Media Law Resource Center in New York. “Usually banning political speech would be a violation of the First Amendment. But with photography at polling places, there’s an intersection of two fundamental aspects of democracy: freedom of speech and the integrity of the voting process.”

Regardless of how confusing the law might be right now on whether it’s OK to snap that ballot selfie, a quick scroll through the #ivoted hashtag on Twitter makes it clear that plenty of people are still going to take them. If you’re among those planning one, consider reading up on your state’s law before going ahead with it, though.