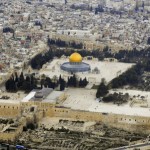 What if a person is moving to Chutz L’aretz for a non-compelling reason, is he permitted to do so?

Before discussing leaving Eretz Yisroel let us discuss the Kedusha of the land. Maseches Makkos, Daf 19, discusses the topic of kedushas Eretz Yisroel.

There is a dispute in the Gemara whether Kidsha l’shayta v’lo kidsha l’asid lavo. We know that terumos and maaseros no longer apply in Eretz Yisroelon the level of a mitzvah d’oraisa, since its kedusha is not an everlasting holiness for all time. The simple reading of this Gemara would imply that because lo kidsha l’asid lavo there is no holiness Eretz Yisroel today. Does it follow that it is permitted to leave Eretz Yisroel today because it has nokedusha?

There is a dispute between halachik authorities whether the prohibition to leave Eretz Yisroel is applicable today. Among the sources that discuss this question are Bais Shmuel Even Haezer 75,20; Gr”a ibid 17; Pischei Teshuva ibid 6; Vayoel Moshe Mamare Yishuv Eretz Yisroel; Shu”t Mincha Shlomo Tinyan 100,10. The majority consensus seems to be that this prohibitions is applicable today. There are at least four different opinions as to why it is forbidden to leave Eretz Yisroel.

The Rashbam, on Bava Basra, Daf 91, writes that it’s forbidden to leave Eretz Yisroel, shehmafkia atzmo min hamitzvos hateluyos baaretz. – there are fewer mitzvos when a person lives in Chutz L’aretz, therefore by leaving Eretz Yisroel a person exempts himself from mitzvos.

It seems that it is a general prohibition for a person to be mafkia himself from a mitzvah. R’ Moshe Feinstein in Even Haezer, siman 102, says that theissur of leaving Eretz Yisroel is only an issur D’rabbanan. From this it follows that according to the Rashbam to be mafkia atzmo min hamitzvos is anissur D’rabbanan.

The concept of mafkia atzmo min hamitzvos has many practical applications. For example, a person who puts himself in a place where there is nosukkah on Sukkos, or in a situation where he can’t do as many mitzvos as he could before.

The Meiri in Kesubos, Daf 110, gives a third opinion. The Meiri writes that it is forbidden to leave Eretz Yisroel, because Eretz Yisroel has a tremendous advantagein the chochma and yiras hachet that is commonly found there. Those living in Eretz Yisroel, yicholin laavod es Hashem kiraui, could serve Hashem the right way. But, writes the Meiri, this is not the case for someone living Chutz La’aretz, where there are Ol hagalus and moretzaros. Within Eretz Yisroel it is easier to serve Hashem overall, in a land that has yiras hachet within it. Only yichidim– individuals – can serve Hashem properly in Chutz L’aretz.

This is a more general approach than the previous opinions. The Rashbam refers specifically to mitzvos hateluyos baaretz and the Ramban discusses the mitzvah of yishuv Eretz Yisroel. But the Meiri is taking a broader approach, all the mitzvos are easier to perform in Eretz Yisroel, and therefore a person will be lax in all of the mitzvos by going to Chutz l’aretz.

On a somewhat similar vein, the Chasam Sofer in Yoreh Deah, Siman 233-4, writes that Eretz Yisroel was special even before it received kedushah through Yehoshua and Ezra. Even before kedusha of Yehoshua and Ezra it was the place where Adam Harishon brought korbonos, and where occured Akeidas Yitchok, and Yakov’s dream. Interestingly, the Chasam Sofer ibid Siman 235 writes that we don’t find in any source that Eretz Yisroel received kedusha with the sacrifices of Adam or Noach, only after Avrohom did the Akeida do we find that Har Hamoriah as being a place of a lastingyirah

It follow that according to both the Chasam Sofer and the Kaftor V’ferach Eretz Yisroel was a special place even prior to kibush Ezra and kiddushYehoshua. Chasam Sofer write that, paradoxically, according to those authorities that nowadays kedushas eretz yisroel does not apply there is more reason to live in Eretz Yisroel. His reasoning it that since there is no kedusha one need not be concerned with transgressing the mitzvos hateluyos baaretz, while this that Har HaMoriah is the gate to heaven is not and will not become batel, and those who live near this holy place partake in its kedushah.