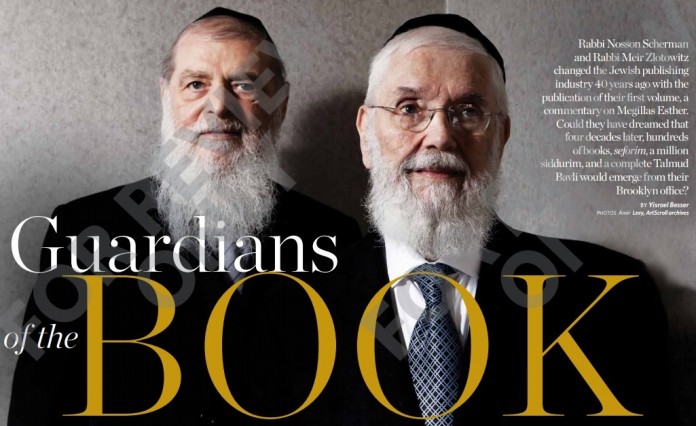 Rabbi Nosson Scherman and Rabbi Meir Zlotowitz changed the Jewish publishing industry 40 years ago with the publication of their first volume, a commentary on Megillas Esther. Could they have dreamed that four decades later, hundreds of books, seforim, a million siddurim, and a complete Talmud Bavli would emerge from their Brooklyn office?

Besser writes, “It feels a bit like davening Mussaf from the amud on Shabbos, and then, as you casually chant your way through chazaras hashatz, you notice that Chazzan Helfgot is sitting behind you. As a writer, I feel no small degree of hesitation interviewing Rabbi Meir Zlotowitz and Rabbi Nosson Scherman, the men who — forgive me — wrote the book on how it’s done. In the Jewish publishing world, they were the first to use tools like sophisticated graphics and a user-friendly interface. The minute attention to detail also stood out. What came after them, the Orthodox media and publishing industry, has its roots in their revolution.

“So it’s not an interview. It’s old friends reminiscing, reflecting on a journey. But instead of a Sunday get-together with lemonade and rocking chairs on a front porch, they’re sitting around a small conference table at ArtScroll headquarters in Brooklyn, surrounded on all sides by a shimmering rainbow of books. Although they are one of the more well-known duos in contemporary frum life, it isn’t immediately apparent why they gel: Reb Meir is chattier, with the tempo of an easy schmoozer, while Reb Nosson is more contemplative and academic, choosing his words carefully. Yet after a few hours of conversation, it becomes clear that they could easily switch roles if necessary. And that might be the secret of ArtScroll and the partnership at its core.”

“Don’t say it was a vision,” Rabbi Besser quotes Rabbi Zlotowitz as saying. “We aren’t visionaries. There was no big picture. We jumped in and were led along by Heaven.”