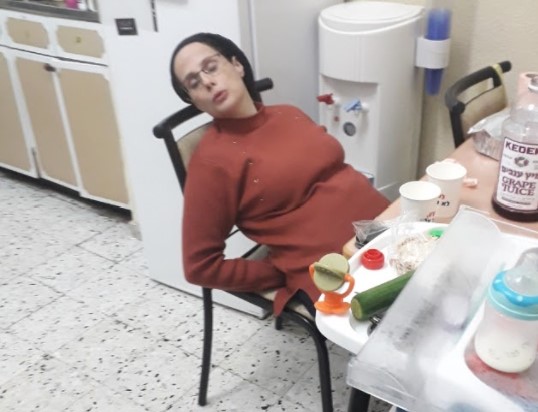 People are shocked at what is happening to Rabbi and Rebbetzin Meislish, a popular couple in Eretz Yisrael known for their contributions to Klal Yisrael. She was diagnosed with a fairly common disease known for its mild symptoms. Unfortunately the results are anything but mild and have spread from the confines of her body onto her husband and 5 kids, but not for the reason you might think. If the spread isn’t stopped ASAP, this family, constant providers of essential services for the Jewish people, will collapse and all of us in Am Yisrael will be worse off.

Rabbi Meislish is talmid chacham and a leading mechanech whose way with words is credited with not only saving countless Jewish boys who were off the derech, but lifting them to high levels of learning and spirituality. Amazingly, some of them have become great Talmidei Chacham. Rebbetzin Meislish was an in-demand, kindergarten teacher who infused the next generation with a love of Torah and mitzvot. Between them, they had a good parnassah, which they used to support their 5 kids, including paying for the tutoring and treatments they needed.

Unfortunately, while giving birth to their 3rd child, her nervous system was severely damaged. She contracted Fibromyalgia, which almost always only affects it’s patients slightly. She has proven to be the rare exception and was constantly hospitalized; always losing weight until she weighed under 36 kilos (80 pounds). She can’t work anymore and when she is home (which isn’t often) she can’t help with cooking, cleaning or childcare because she is in too much pain to move. Her husband was forced to become “Mr Mom”. Though Rabbi Meislish is a loving father, being forced to be the sole breadwinner and childcare provider is taking its toll on him. For even the best fathers, giving motherly needs is unnatural and his kids are suffering as a result and are now in dire need of therapy.

Well meaning friends are pressuring him to divorce his wife for his own good. They tell him “She isn’t doing anything for you, just being a burden.” The Rabbi responds “She is a good wife. She didn’t ask for any of this.” To his credit, he hasn’t even entertained the thought for a moment but acknowledges the situation is desperate. He finds it ironic that after having saved so many lost Jewish boys for years, his boys may become lost unless Klal Yisrael steps in to help. Two of the Gedolei hador: Rav Meir Simcha Auerbach, shlita and Rabbi Avraham Yehoshua Lazenga, shlita have written haskamas and given their brachos that anyone who helps should merit material abundance and nachas from their descendents forever. To take part in this tremendous mitzvah opportunity, click here.