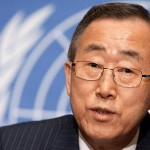 The following is a statement from the National Council of Young Israel (NCYI) in which it lambasts United Nations Secretary General Ban Ki-Moon after he questioned whether Israel was using “excessive force” in the wake of an outbreak of terrorist attacks aimed at Israelis:

“The intimation by UN Secretary General Ban Ki-Moon that Israel’s response to a rash of deadly terrorist attacks aimed at innocent men, women and children is ‘excessive’ is absolutely abhorrent. It takes an incredible amount of ‘chutzpah’ for Mr. Ban to somehow suggest that Israel’s defensive actions to protect its citizens are disproportionate relative to the horrific and heinous acts of violence carried out by Palestinian Arab terrorists that have claimed far too many lives. The failure of the United Nations to condemn the violence against Israel and the Secretary General’s implication that Israel’s efforts to safeguard its people is ‘excessive’ are the latest reminders that this international body and its leadership harbor a deep-seated bias toward the Jewish State and have no objectivity whatsoever when it comes to matters involving Israel.”