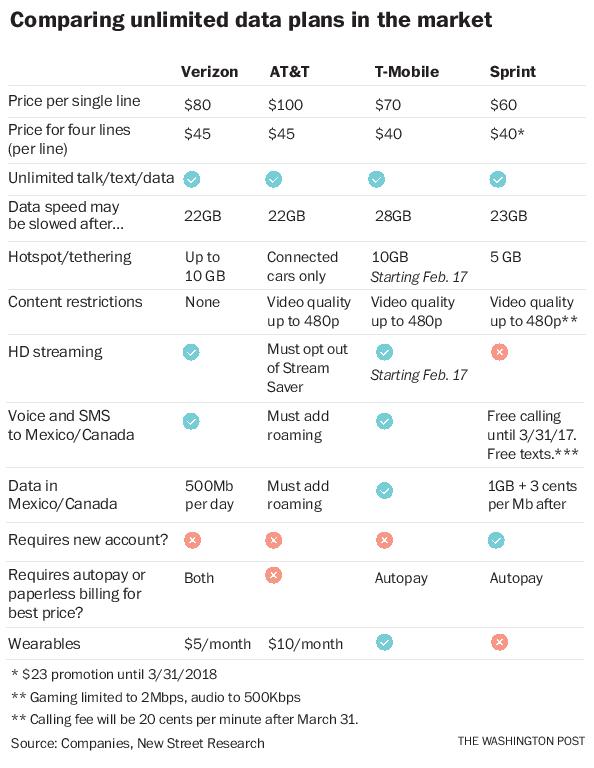 With all the unlimited mobile data plans out there these days, it’s easy to feel a little lost. Between the varying offers and the fine print, choosing a data plan in 2017 may seem like an exercise in frustration.

The good news is, you’re not alone. Today, we’re going to flesh out the details of each plan to help you make a better decision. If you’re wondering whether these newfangled plans are a good deal, read on for everything we know.

— Do you even need an unlimited plan?

This is the first question you’ll want to answer before you grapple with the carriers’ various offerings. Let’s say you don’t use your mobile data for very much beyond basic Web browsing and email. Or maybe the bulk of your smartphone usage happens while you’re at home or at the office, where there’s WiFi. Under those conditions, you might be better off signing up for a metered plan – that is, one with a monthly data cap.

These plans tend to be more affordable than the typical unlimited data plan, assuming you stay within your data limits. For example, the difference in price between a 2 GB plan on Verizon and an unlimited plan on the same network is about $45 a month for a single line.

Exceeding your monthly cap on a metered plan could result in additional fees or reduced browsing speeds. If you find yourself blowing past your limit on a regular basis, you might consider upgrading to a larger data bucket or to an unlimited plan.

To figure out how much data you use in a month, follow these steps if you’re an Android user (http://www.tomsguide.com/us/monitor-data-usage-android,news-21226.html) and these instructions if you’re on iOS (https://support.apple.com/en-us/HT201299). Spend a few weeks analyzing your habits, and some useful trends should emerge.

If you stream lots of music or video over 3G or 4G LTE, then you may want to consider an unlimited plan. But which service to choose? Below is our side-by-side comparison of all the major carriers’ offerings. We’ll highlight particular points of interest, but consider this a starting point.

As you can see, while it may be tempting simply to choose the cheapest option, there are a ton of other factors that may shape your decision.

Many of these plans come with a trade-off of some kind or another, meaning that although they vastly expand the amount of data you’re allowed to use compared with other plans, they’re still not technically “unlimited” as their marketing may imply.

AT&T, for example, requires its unlimited data customers to subscribe to one of its television products, DirecTV or U-verse. It doesn’t matter if you already have AT&T cellular service but not TV, or vice versa. You just need to end up with both phone and TV service at the end of the day to qualify for unlimited data. This might not make sense if you already get your TV service through a company such as Comcast or Verizon, but it could work for those households that don’t already subscribe to TV. Note that DirecTV Now, AT&T’s online streaming TV service, doesn’t count toward this program. So if you have that and are simply hoping to tack on an unlimited wireless subscription, you’re out of luck.

If you don’t care about how good your video looks or how nice your streaming audio sounds, you might consider saving some money and opting for T-Mobile or Sprint. Both carriers tend to downgrade content quality in order to reduce the load on their networks; Sprint is particularly aggressive about it, limiting audio streams to a bitrate of 500 kbps, online games to 2 Mbps and video to 480p resolution. This means audio may sound less clear, video games may not perform as smoothly and video may not appear as sharp. There doesn’t appear to be a way around Sprint’s policy, but it also offers the cheapest unlimited plan of the bunch.

T-Mobile’s approach to content is a little more mixed. Customers of its unlimited plan, T-Mobile One, can choose whether to view online videos at reduced quality or at full HD resolution starting Feb. 17 for no extra charge (currently, HD capabilities cost an additional $15 per month per line).

This offers greater flexibility, but for those who constantly stream at full HD, there are other risks to consider. Use too much data (more than 28 GB in a month) and T-Mobile may decide to slow down your connection.

T-Mobile isn’t the only company that says it may throttle your consumption after a certain point. Verizon, T-Mobile and Sprint all have policies designed to curb extremely heavy data usage above 20 GB a month. This may seem nonsensical for a plan that’s billed as “unlimited” – and regulators have tended to agree – but until carriers change their ways, data hogs who hit their carriers’ unlimited limits might consider moving some of their Internet usage to a residential broadband plan.

— Can I share my phone’s connection to a PC?

If you need to do some work on your laptop but there’s no WiFi, one option is to share your phone’s data connection with your PC. If this is important to you, you may want to choose Verizon or T-Mobile because they offer a lot of tethering data. Verizon’s unlimited plan supports up to 10 GB of hotspot usage per month right out of the box, while T-Mobile plans to make 10 GB of monthly hotspot data available to T-Mobile One customers beginning Friday.

If you frequently travel to Canada or Mexico, T-Mobile arguably offers the easiest solution in its unlimited plan. Data roaming is included, and you don’t have to go out of your way to add on a roaming package. You use your data just like you would in the United States. T-Mobile was also the first to liberalize its broader international roaming policies, which remain pretty competitive.

— What if I have a grandfathered unlimited plan?

If you signed up for an older unlimited plan years ago before companies such as AT&T and Verizon stopped selling unlimited plans, should you switch? The answer depends on what you’re currently paying, and whether some of the restrictions mentioned above are deal-breakers for you.

As an example, suppose you’re paying $90 a month for a single grandfathered unlimited plan on Verizon.

It costs $39.99 a month for the phone line, plus $49.99 for the unlimited data. Since you can’t have the unlimited data without the voice service, we can treat the sum as the effective cost of the unlimited plan. In this example, the person receives a few discounts here and there that appear tailored to his or her particular situation, so let’s simply use the $90 base figure and move on.

Compared to the price of one of the new Verizon unlimited plans, this legacy plan costs about $10 more per month, and it doesn’t come with hotspot data or the roaming benefits of the new plans. So switching to the new unlimited plan might be a good deal. Since this person used only about 7.9 GB of data in the last billing cycle, he or she could also save $20 a month by downgrading to Verizon’s 8 GB plan. But that would mean flirting with overages if that usage started to grow substantially.

That’s just one example. Your situation may be different; the decision to switch, and to which company, is up to you. But as with any data plan, consider your needs and balance them against the tradeoffs.