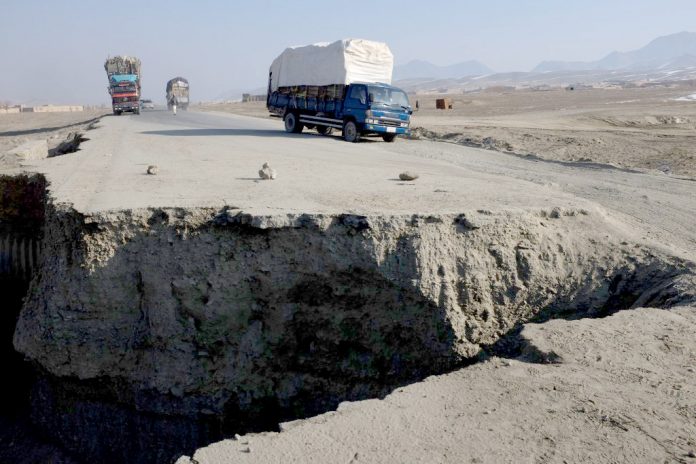 Thirteen years ago the United States called the reconstruction of the Kabul-Kandahar highway “the most visible sign” of efforts to rebuild Afghanistan. But today, that stretch of road is no longer a sign of progress.

Instead, littered with bomb craters and insurgent checkpoints, it’s now “beyond repair,” according to an Afghan official, and a symbol of the failed U.S. intervention here.

A report released Saturday by a U.S. government oversight body paints a grim picture of the state of Afghanistan’s roads, including the roughly 10,000 miles that were constructed, paved, repaired or funded by the United States. The new roads were hailed as key to bringing economic growth and security, even when they eventually became too dangerous for travel.

Now, the Office of the Special Inspector General for Afghanistan Reconstruction (SIGAR) says 95 percent of the sections of road they inspected were either damaged or destroyed. And 85 percent were either poorly maintained or not at all.

The U.S. government has spent nearly $3 billion on road projects in Afghanistan, which had just 50 miles of paved road in 2001. But according to an estimate from the U.S. Agency for International Development, it will cost more than $8 billion to replace the country’s road infrastructure if the highways continue to be neglected.

The report from SIGAR identifies several reasons for the poor conditions, including government corruption, a lack of funding, and insecurity along the highways, where both criminals and insurgents menace travelers.

According to the Defense Department, Taliban militants now control about one-third of Afghanistan’s 407 districts. Militants also extort money from construction crews, in exchange for a tacit cease-fire while repairs take place.

For some, incidents like this highlighted the flaw in U.S. efforts to forge ahead with massive infrastructure projects, no matter the cost.

But those development dollars often lined the pockets of insurgents, shady contractors, and corrupt government officials. And roads have little benefit if they’re controlled by militants or criminals.

This type of development “teases Afghans with the prospect” of infrastructure, Foust said, “but doesn’t actually provide it.”