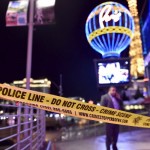 The woman accused of deliberately driving her car onto a crowded sidewalk on the Las Vegas Strip told investigators that she was stressed out by security guards who repeatedly chased her from parking lots, where she had been trying to sleep in her car.

Lakeisha Holloway, 24, mowed down more than 30 pedestrians and killed at least one person Sunday night.

The Oregon native “would not explain why she drove onto the sidewalk but remembered a body bouncing off her windshield, breaking it,” according to a police report obtained by the AP.

Holloway and her 3-year-old daughter had been sleeping in a 1996 Oldsmobile in parking lots and garages. Holloway is expected to be charged with murder with a deadly weapon, said Clark County District Attorney Steve Wolfson. Read more.