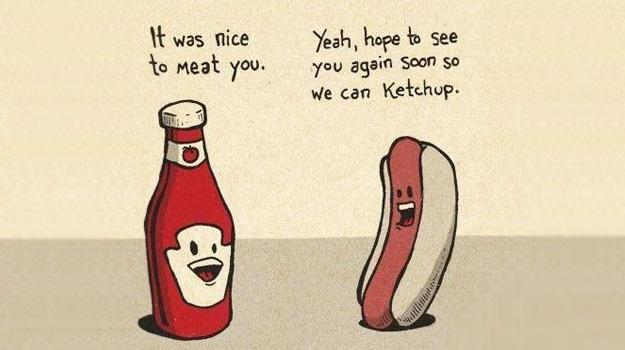 Lately, I have been receiving not-so-subtle signals from everyone who has ever met me: they have finally discovered what ails me.

I thought puns were a sign of a love of language. I love language, even punctuation. (What happens when you forget punctuation? I’ll be ill.) No pun is beneath me.

But now it turns out they’re also a symptom of brain damage.

The name of the condition is “witzelsucht.” It’s German for “joke addiction.” In a paper recently published in The Journal of Neuropsychiatry & Clinical Neurosciences, the scientists Elias D. Granadillo and Mario F. Mendez diagnosed two patients with it. One suffered brain damage and, soon after, the puns began. “Additional frontal-subcortical circuit dysfunction may promote pathological joking as a compulsion,” the abstract notes.

This can also make you more likely to laugh at your own jokes and leave you totally unmoved by the jokes of others.

In other words, this condition makes you entirely insufferable.

Then again, if punning is a condition, not a choice, maybe we can get special accommodations. We can carry small “Witzelsucht” cards in our wallets for the next time someone says, “I’m exhausted!” and we respond, “Nice to meet you, Exhausted! I have Witzelsucht, a serious condition.”

Over the years, various people have come up with various explanations for puns, mostly unflattering. Puns have been with us for as long as language has, pretty much. There’s a pun from an ancient joke book, written down for Philip of Macedonia, that goes, “Can I borrow your knife until Smyrna?” to which someone responds, “Sorry, I don’t have one that reaches that far!”

For as long as people have made puns, the people who had to listen to those puns have been running them down.

Victor Hugo said that puns were the white substance that the seagull leaves behind on a rock, which shows you what Victor Hugo knew about anything.

But while Witzelsucht might be a serious brain condition that, like most puns, is no laughing matter, I don’t think all puns are to be tarred with this brush.

Although puns can be a symptom of a serious problem, they don’t have to be. If your grandmother is dashing through urban settings, climbing on railings and doing backflips, it might be a symptom of something, or she might simply have discovered parkour.

And we have to put up a fight. If they learn what causes puns, there is a chance that they might try to fix us, like a boxing match. They might sit us down, Clockwork-Orange-style, with a reel of all our greatest puns (“Donald Trump opposes pre-shredded cheese. Make America Grate Again!” “Puns are a fruitful subject: like bananas, they have appeal”) and some Beethoven in the background, thereby ruining all of life’s chiefest joys in a single swoop. They might put us into a situation where we had just gotten a haircut and, when asked about it, we would shudder and become nauseated and could not reply, “No, I had ALL OF THEM CUT.”

No, as the jousting spear said, we will not go gently into that good knight.

The puns themselves are not the disease. The puns are just the symptom. Puns themselves have never done anybody harm, whether small or full-groan.

Compulsive punning is not a disease. It just makes the people around you sick.

And even if it’s a disease — well, as the ham so famously cried, I DON’T WANT TO BE CURED.

(Actually maybe I should see a doctor.)