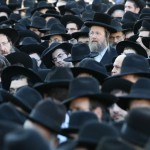 The four people who were murdered in the brutal Palestinian terror attack on Kehillas Bnei Torah in Har Nof all lived on the same street.

Rabbi Avraham Shmuel Goldberg, 68, Rabbi Moshe Twersky, 59, Rabbi Kalman Levine, 55, and Rabbi Aryeh Kapinsky, 43, were all residents of the Har Nof neighborhood and had made aliyah to Israel in recent years.

Rabbi Goldberg was a U.K. citizen while the other three rabbis held U.S. citizenship.

“When we count the widows and orphans that were added to the Israeli nation this morning, four widows and 24 orphans are on one street,” said Rav Yitzchak Mordechai Rubin, the rov of Kehillas Bnei Torah shul.

“We are here, standing in front of these three holy men, the best of our community, Torah scholars whose blood flowed like water.”

The four were among the some 25 mispallelim at the shul when two Palestinian terrorists stormed in armed with meat cleavers, an ax, and a gun, shooting and stabbing worshippers. Cousins Uday and Ghassan Abu-Jamal from the Jerusalem district of Jabel Mukaber, carried out the attack and were members of the Popular Front for the Liberation of Palestine (PFLP). In addition to the four rabbis who were killed, eight others were also wounded in the attack.

The bloody attack was heavily condemned by leaders and officials from across the world. “On behalf of the United States government and the American people, I condemn this terrorist attack in the strongest possible terms. Murdering worshipers at prayer in a synagogue is an act of pure, unadulterated evil,” related U.S. Ambassador, Dan Shapiro.

“Beyond the terrorists who were killed by police responding to the attack, any others involved must be held responsible and brought to justice,” added Shapiro.

Meanwhile in Gaza, Palestinians celebrated the Jerusalem synagogue attack, throwing sweets and brandishing knives and axes in praise of the terrorists.

Even Bahrain’s Foreign Minister, Khalid Bin Ahmed Al-Khalifa issued a statement condemning the attack in Jerusalem. “The murder of Jews praying in a synagogue is a crime,” he said. “The injustice of the occupation does not give a right to cause harm to innocent worshipers.”

Later on Tuesday evening, Prime Minister Benjamin Netanyahu ordered the demolition of the homes of the Abu-Jamal terrorists in East Jerusalem who carried out the attack in Har Nof today.