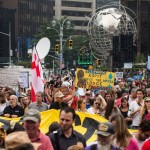 More than 300,000 people joined in the People’s Climate March in New York City, as organizers to claim it as the largest march for climate change on record. People from all over the continent and from a diverse array of backgrounds gathered at the Museum of Natural History for the start of the march, with over 500 buses carrying people from South Carolina, Kansas, Minnesota and Canada. A group of marchers from California came via a “climate train.”

The march was timed with the UN summit this week, which is expected to set a strategy for dealing with international climate change.

Following the march, a number of protestors planned to stage a massive sit-in on Wall Street on Monday morning, as part of the Flood Wall Street movement, to draw attention to the fact that rising sea levels could inundate lower Manhattan. That protest is illegal, making arrests likely.

“The 99 percent, if you will, of people are not in power,” said lay leader Beth Ackerman. “They might not have power, they might not have money, but they have a voice. But they won’t have a strong voice unless massive amounts of them get together.” Read more at MSNBC.