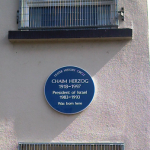 Herzog, whose father served as Chief Rabbi of Ireland, was born in Belfast in 1918 and later moved to the Mandate of Palestine in 1935. Herzog went on to have a distinguished military, legal and political career in Israel before serving as president from 1983 to 1993.

According a local government official, the plaque, which was erected in 1998, was removed after a series of anti-Semitic attacks in the area prompted concern for the safety of residents there.

“Attacks have included the scrawling of anti-Israeli graffiti on the building and items being thrown at the plaque and the house,” Brian Kingston, a local government official, told the Belfast Telegraph. “Recently some youths were stopped in the process of trying to remove the plaque with a crowbar.”

Kingston added, “out of concern for staff and for residents living in neighbouring houses, the community group and the Ulster History Circle have decided that it was best to remove the plaque for the foreseeable future, and it was removed at the end of last week.”

Like elsewhere in Europe, anti-Semitism has been on the raise in the U.K. and Ireland. Last month, anti-Semitic graffiti was found on Belfast’s sole remaining shul.