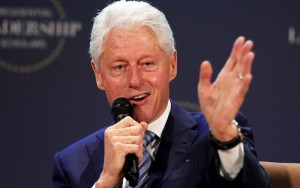 Bill Clinton said at a NAACP meeting in Philadelphia on Wednesday that he made a mistake by signing the 1994 Violent Crime Control Act that lengthened federal sentences for many crimes.

“I signed a bill that made the problem worse. And I want to admit it,” he said.

Clinton sounded a lot different when he signed the bill: “Gangs and drugs have taken over our streets and undermined our schools. Every day, we read about somebody else who has literally gotten away with murder.”