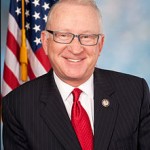 “We’re faced with common enemies, radical Islamic terrorists who have absolutely no inhibitions on executing people, terrorizing people, targeting innocent civilians,” Netanyahu said, drawing comparisons between the terror groups Islamic State and Hamas. “We just had ISIS conduct mass executions, this is exactly what Hamas has done in Gaza.”

Netanyahu also thanked the delegation for “your support and [the] support of the United States of America in this common effort.”

U.S. Rep. Buck McKeon (R-CA), chairman of the Armed Services Committee, thanked Israel for “standing up to these enemies of mankind.”

“People that have no value of human life that want to rule the world however they can do it,” he said.

“I think the example that you have set, that your people have set when they’ve been attacked, how you’ve been able to defend your people with the least possible loss of human life, sets an example for the world,” he said.