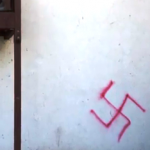 The California State Assembly on Monday passed a resolution urging action on the increasingly rampant anti-Semitism on University of California (UC) campuses.

The resolution urges each UC campus to “adopt a resolution condemning all forms of anti-Semitism and racism.”

The bipartisan measure was introduced by State Senator Jeff Stone (R-Riverside County) following a series of events that targeted Jews and Israel on UC campuses, including an incident at UC Davis in which a swastika was painted onto an Alpha Epsilon Pi (AEPi) Jewish fraternity building and the UCLA student government’s probing of a Jewish student’s religious identity during a hearing on her application for a judicial board position.

The American Jewish Committee (AJC) applauded the California lawmakers for approving the legislation.

“Anti-Semitism must be confronted without any equivocation, for it threatens not only Jews but the values Americans cherish,” AJC Los Angeles Regional President Dean Schramm said.

“We join with the Members of the California State Senate and Assembly in urging the UC Board of Regents and all UC campuses to swiftly adopt resolutions condemning anti-Semitism and to work toward a more secure and friendly environment for Jewish students,” he said.