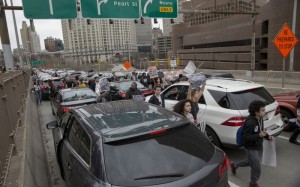 New York City cracked down on police brutality protests Tuesday, arresting more than a dozen demonstrators during a march across the Brooklyn Bridge that stopped traffic and began in Union Square.

Reports of wounded protesters and two injured police led to a tense standoff between both groups.

Mayor Bill de Blasio called the reports of injured officers “unacceptable” and said “anyone who decides to foolishly engage in such destructive acts can expect a swift arrest and aggressive prosecution.”

Elsewhere in the country, L.A. police said they arrested 15 protesters while more than 100 demonstrators in San Francisco gathered at a police station and disrupted a meeting at City Hall. In neighboring Oakland protests poured onto Interstate 880, according to local media. Read more at the New York Post.