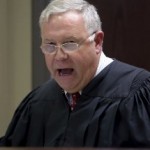 “There are four kinds of people in this world—black people, white people, red necks, and niggers,” Gosnell told a black defendant in a 2003 hearing.

In fact, court “announced prior to the bond hearing that Circuit Court Judge J.C. Nicholson would preside over Roof’s criminal charges, not Gosnell, per standard procedure in South Carolina,” NBC wrote later without correction.

“Circuit judges are the ones that oversee trials, while magistrates preside over bonds and 30-day misdemeanors.” Read more at NBC News.