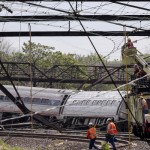 An assistant conductor said she thought she heard an Amtrak train engineer say his train had been hit by projectiles before the derailment this week, the National Transportation Safety Board said Friday.

The FBI has now been asked to join the investigation, according to NTSB member Robert Sumwalt.

The NTSB on Friday interviewed engineer Brandon Bostian, as well as two assistant conductors who were on the train that wrecked in Philadelphia Tuesday night.

The 39-year-old assistant conductor said about three or four minutes after leaving the 30th Street Station in Philadelphia, she heard the engineer talking to an engineer from the Southeastern Pennsylvania Transportation Authority.

The assistant conductor recalled that the SEPTA engineer had reported to a train dispatcher that his train had either been hit by a rock or shot at, and that his SEPTA train had been left with a broken windshield and placed in an emergency stop.

The assistant conductor also said she heard Bostian say something about his own train being struck by an object, Sumwalt said.

Meanwhile, the last wrecked railcars from the deadly Amtrak accident were removed Friday as investigators tried to figure out why the train sped up from 70 mph to over 100 mph in the minute before it went into a sharp bend.

Brandon Bostian, the engineer whose handling of the train has emerged as a central element in the probe, has agreed to talk to federal accident investigators in the coming days, the National Transportation Safety Board said.