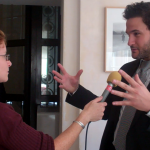 Nearly 13 years ago, a Ukrainian woman and her Palestinian husband drove a suicide bomber to Rishon Lezion, a city in central Israel. The suicide bomber entered a game club on the night of May 7, 2002, located on the third floor of a building and detonated a suitcase full of explosives, complete with shrapnel and nails. Patrons at the club had been playing card games, slot machines and snooker, as the explosion went off causing part of the building to collapse.

Ibrahim Hamda, the Hamas terrorist responsible for masterminding the game club attack and others like the Café Hillel and Hebrew University bombing, received 54 life sentences in 2012. The Ukrainian woman, Irina Polishchuk meanwhile received 20 years in prison and was freed in the Gilad Shalit deal, while her husband, Ibrahim Sarahme was given several life sentences.

Jacob Kimchy, a 24-year-old university student at the time of the attack, went to the club that night to help out and discovered a horrifying scene that he described as “the devil’s playground.”

Fifteen people were killed and over 55 others wounded in the attack, for which Hamas claimed responsibility. “Nothing prepared me for what I found,” recalls Kimchy, who had completed his IDF service. “It was a horrific site, an abnormal reality.”

But for Kimchy the terror attack hit much closer to home.

Among the 15 killed including a Christian Arab woman from Jaffa, was his father, Rahamim Kimchy, 58 who worked as a taxi driver and had gone into the Sheffield Club looking for a customer who had not come down to the taxi. Kimchy was an employee of the Israel Aircraft Industries, and had become a taxi driver after suffering a serious work accident where he lost his leg.

“I saw my father’s taxi outside the club at some point, called his cellphone, and no answer. At the end, the explosion had been so strong that we didn’t even have his body to bury,” said Kimchy.

Rahamim’s murder left the family in a state of shock and Jacob himself describes the feeling of despair that overtook him. Kimchy uprooted his life, moved to the US and opened a foundation called One Heart in 2005, dedicated to helping victims of terrorism around the world and became a public speaker on the subject. “I had a lot of pain but I wanted to do something positive with it,” he explained.

“When my father lost his leg during the work accident, he became the strongest man I have ever known,” explains Kimchy. “He showed me that with hard work and belief, we can rebuild our strength in our soul and create a better reality around us.”

“Eventually, I rediscovered meaning and purpose in my own life by helping other victims,” said Kimchy, who received a Masters of Science in Management from Polytechnic University in New York.

One Heart offers free counseling to help child terror victims and in March 2011, the non-profit brought together a group of teenagers from Liberia, Rwanda, Northern Ireland, Spain, France, the US and Israel to spend a week together in New York. Kimchy has worked closely with companies, government organizations, and non-profits on the needs of trauma victims, helping to build a better networking system to assist victims over the past 10 years.

“After working with victims of terrorism for nearly a decade, and through my own experience with losing my father to terrorism, I saw first-hand how important the message of surviving trauma was and how critical help can be to others who are suffering,” Kimchy told Tazpit News Agency in an interview.

“Trauma is an event that touches a very deep place in our soul and it’s an important subject that isn’t discussed enough today,” Kimchy told Tazpit.

It is one of the reasons why Kimchy decided to write a memoir about his life journey called “A New Sunrise.”

“My journey over the years with getting help, giving help to others, speaking about victims and surviving trauma, have all helped me to get to where I am today – and all this led me to publish this book,” said Kimchy who today lives in Los Angeles with his wife.

“This is my mission in life – to help others and empower them to find their new sunrise. While it’s easy to give up when something traumatic happens, there is another path where pain can be used to grow and find happiness.”