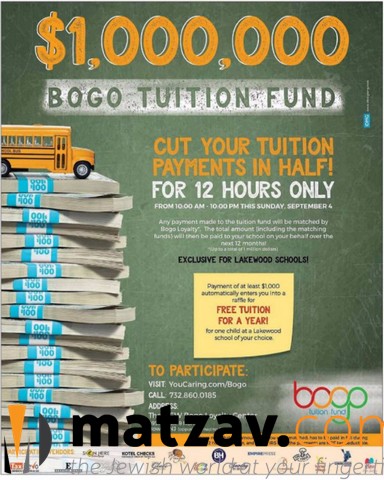 A new endeavor, the Bogo Tuition Fund, has been established, stating that it will match people’s tuition donations, up to a total of $10,000 per family, to benefit families in Lakewood, NJ.

The fund is operating from the You Caring crowd-funding website, along with a storefront in Lakewood, claiming that it is designed to help “families struggling to pay tuition [in] Lakewood Township, NJ.”

After being deluged with emails and phone calls, Matzav.com reached out to the founder of the fund, Zvi Bogomilsky. In an exclusive interview this afternoon, amidst the tumult surrounding the fund, Zvi explained that first and foremost, his company, Bogo Loyalty, LLC, has no access to the funds being raised.

“Every penny that comes in is under the control of Zachariah Waxler, CPA, a partner at Roth & Co., who is the accountant of this fund. All money coming in goes into an account that he controls,” said Zvi.

Zvi explained that the fund is being overseen by Waxler together with Rav Chaim Mayer Roth, rov of the Sterling Forest-Nusach Sefard shul in Lakewood.

Zvi says that he will be matching the funds that come in, up to a million dollars.

“No money is going to Bogo Loyalty,” he reiterated.

Zvi, who resides in Monsey, NY, told Matzav.com that for the past five years, he has organized a loyalty program with stores in Lakewood, NJ. His program gives customers ten percent back on their purchases, while benefiting stores with increased exposure and advertisement.

This past year, Zvi spoke to a group of parents at the annual dinner of a large Lakewood mosad, sharing his loyalty ideas with them.

Matzav.com asked Zvi why the names of the accountant and Rav Roth were not publicly disseminated. He said that this information has since been updated on the site.

Zvi also explained that the names of the Lakewood schools on the site – over 100 of them – do not in any way indicate that they have agreed to participate in the fund. It is simply a list that provides visitors with an idea of to which mosdos they may donate.

“No schools in Brooklyn or elsewhere are eligible,” he told Matzav. “And in Lakewood, we have simply shared the names of the mosdos. They have no agreement with us whatsoever.”

The site asks visitors to “Please specify the name of your child and the school that he is attending, in order for us to properly credit it to your child’s tuition,” also stating that “You can give towards multiple schools, as long as the total does not exceed $10,000.”

The site states that “per IRS rules, these payments are not tax deductible.”

The site adds, “Due to the overwhelming response we got so far from the Lakewood community, in order to give more families a chance for us to help them with their tuition payments, we are limiting the amount that we will match per family. Each family can have up to $10,000 of their tuition matched. So the maximum that each family can receive for this coming school year in matching funds is $10,000. For example: If you give the maximun (sic) amount of $10,000, the Bogo Tuition Fund will give another $10,000 in matching funds, and a total of $20,000 will be given over the next 12 months, to your designated school(s) on your behalf.” 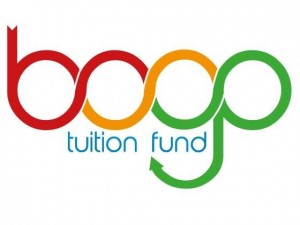 Tzvi Bogomilsky of Miami Beach, FL, tells Matzav.com that he’s been called by rabbonim and askonim from Lakewood, wondering if he is behind this fund. “I have no affiliation whatsoever with this tuition fund,” he said. “People who are donating need to ask why it’s not affiliated with a charity. To me, it seems like a very clever scam.”

As mentioned, the Zvi Bogomilsky behind the Bogo Fund resides in Monsey, NY.

An administrator at a Lakewood school told Matzav.com that while the organizer is well-meaning, “until rabbonim and askanim issue a haskamah, stating that this is something to get involved in, people should be careful.”