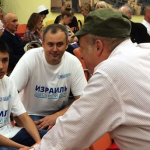 The final group of new immigrants for the Jewish year of 5774 arrived to Israel yesterday. Some 140 new immigrants from Russia and Ukraine arrived at Ben Gurion International Airport on Monday, September 22, aboard flights organized by The Jewish Agency for Israel and the Ministry of Aliyah and Immigrant Absorption. About 4,200 Ukrainian immigrants arrived to Israel fleeing unrest this year, a twofold increase in immigration compared to last year.

Oksana, 39, and her husband, Viatscheslav Zheludev, 41, were among the 140 new Ukrainian immigrants who arrived to Israel with their 16-year-old son, Artur, from the city of Lugansk in the embattled eastern Ukraine. The family had spent the past few weeks in the cellar of their home without power, water or food, due to the ongoing fighting in the Ukraine. Waiting to greet them at Ben Gurion Airport was the Zheludevs’ 18-year-old daughter, Alexandrina Zheludev, who immigrated to Israel a year previously with The Jewish Agency for Israel’s SELA (Students Before Parents) program.

It was an emotional reunion for the family who had frequently lost contact with their daughter amid the brutal urban battles between Ukrainian troops and pro-Russian separatists in the war-torn city of Lugansk.

The group was warmly welcomed by the Minister of Aliyah and Immigrant Absorption Sofa Landver and Chairman of the Executive of The Jewish Agency for Israel Natan Sharansky, who himself was born in Donetsk in the eastern Ukraine.

In general, immigration to Israel this year was up 28% compared to the previous year, which represents a five-year high. An estimated total of 24,800 new immigrants arrived to Israel throughout the course of the year.

Commenting on this year’s aliyah increase, the Jewish Agency for Israel’s Executive Chairman, Natan Sharansky stated that “The increase in immigration from the four corners of the globe even in a year in which our enemies tried to undermine our security and challenge Israel’s legitimacy demonstrates that Israel is a country that guarantees both the personal safety of its citizens and the future of the Jewish people.”